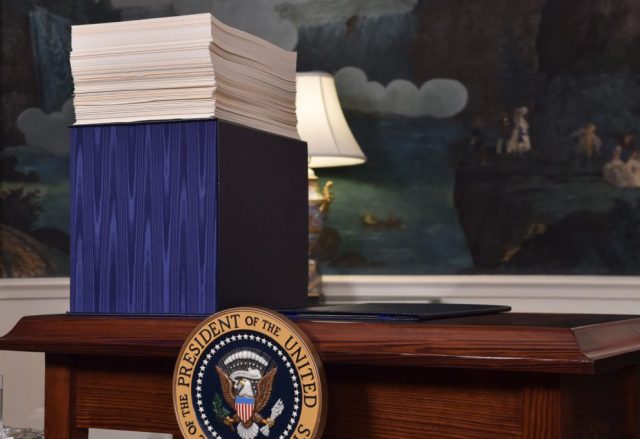 The omnibus spending bill passed by the House and Senate last week includes many victories for agriculture. Farm groups applauded the inclusion of the Fair Agricultural Reporting Method, or FARM Act, that Act exempts air emissions from animal waste from being subject to the Comprehensive Environmental Response, Compensation, and Liability Act, or CERCLA, reporting requirements. Senate Agriculture Committee Chairman Pat Roberts says he was “pleased” with the bipartisan deal, which will fund the federal government through the end of the fiscal year. Roberts says the bill gives farmers and ranchers “some regulatory relief.”

The omnibus bill prohibits funding to implement regulations requiring livestock haulers to install electronic logging devices on their trucks to monitor time behind the wheel. That comes after livestock haulers were granted another waiver extension to the law recently. Also included is a solution to address the U.S. Forest Service budget for wildfire suppression, extension of current law of the Pesticide Registration Improvement Act, and legislation relating to dairy product labeling.

The omnibus spending bill also included language regarding milk labeling. The bill directs the U.S. Food and Drug Administration to take action against mislabeled imitation dairy foods, a move the National Milk Producers Federation says is a major victory for farmers and consumers alike. Federation president and CEO Jim Mulhern says the bill will “ensure action,” following “years of inaction” by the FDA regarding labeling of plant-based beverages as milk.

The language in the bill comes from the DAIRY PRIDE Act, introduced in January in the Senate by Wisconsin Democrat Tammy Baldwin. NMPF said that Congress’ instructions to FDA should restrict the ability of beverages made from plant foods from using the term “milk” on their labels. The language will also affect products misusing other dairy food names such as “cheese” and “yogurt” that are defined in the Code of Federal Regulations and cited in the congressional bill.