Only the Strong Will Survive in a Tough Farm Economy

It has been a common theme at winter farm meetings this year: concern about the future farm economy and how to survive it. This was the case at the First Farmers Bank and Trust meeting held in Marion on Tuesday.  The presentation given by Dr. Matt Roberts, with The Kernmantle Group and formerly with Ohio University Extension, stressed that only “strong” farms stand a good chance of surviving the tough economic times ahead.  He urged growers to think of their farming operations as separate parts of a whole, “A modern grain farm is really made up of 6 different businesses: agronomy, land ownership, futures speculations, grain elevation, custom machine operation, and capital allocation.”  He added each segment must be as efficient and forward thinking as possible to  survive in the times ahead. Roberts suggested that this segmentation might even go as far as having a separate balance sheet for each field to better determine cost of production and profit potential on different fields.  He said this approach can help determine if a cash rent agreement is worth it for a particular piece of ground.

Roberts said one of the most important factors that will determine an operations survivability is its land costs. “One of the biggest differences between high cost and low cost producers is land rent. I think what will determine who thrives and survives in the next few years will be who can get their land costs under control,” he stated.  He sees land values continuing to fall, but believes this will not have a detrimental impact on agriculture. He said 60% of Midwest farmland is cash rented. Thus, if a farm fails, that land will just be farmed by someone else.

Roberts said building a strong farm is also building a legacy. By keeping food records, collecting lots of data, and planning for the future, growers can not only assure their farms will be strong enough to handle tough times, but that they will be a legacy that can pass along to the next generation. 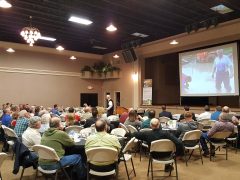 The First Farmers Bank and Trust annual seminar always draws a good crowd for a good program. There were, however, a few empty chairs this year because some producers stayed home to apply anhydrous as the late February temperatures climbed above 60 degrees.