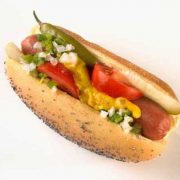 Opening day for Major League Baseball is Thursday, March 29, and that means it is opening day for the hot dog industry. “Two things that just naturally go together: going to the ballpark to watch baseball and eating hot dogs and sausages,” says Eric Mittenthal, National Hot Dog and Sausage Council. He says baseball fans will eat a lot of hot dogs this season, “We estimate that during the baseball season fans will consumer over 19 million hot dogs.” The combined hot dog and sausage total could stretch across the entire continental U.S. from Safeco Field in Seattle, Washington, to SunTrust Park in Atlanta, Georgia.  The hot dog total alone would reach as high as 5,332 One World Trade Centers, the tallest building in the Western Hemisphere and sixth tallest in the world. Hot dogs are a big demand factor for the pork, beef, turkey, and chicken markets.

Mittenthal, says ball parks are getting creative in what they do with hot dogs, “One of the most noteworthy is the Dill Dog.”  This is a concoction sold by the Texas Rangers stadium. “They take a dill pickle, carve out the middle and put a hot dog in it, then batter and deep fry it,” said Mittenthal. “It is sort of like a corn dog pickle thing.” Other creative combinations include:

The Los Angeles Dodgers may have fallen just short of winning last year’s World Series, but the team can relish in a more important victory: fans are once again projected to consume the most hot dogs, totaling more than three million.  That is enough to round the bases at Dodger Stadium 5,952 times, and based on last year’s attendance, means that nearly 80 percent of fans at Dodger home games will eat a hot dog. 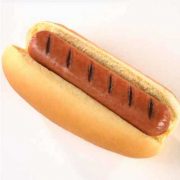 The San Francisco Giants defend their title as MLB sausage champions, with 475,000 expected sales. Giants fans are so passionate about the team’s sausages that they petitioned to bring back a popular Pineapple sausage this season. The St. Louis Cardinals once again stepped up to the plate to clinch second place, with fans expected to consume 419,356 sausages. The Chicago Cubs, meanwhile, knocked the Boston Red Sox out of third place, with Cubs Fans expected to consume 400,000 sausages this year. The Milwaukee Brewers have maintained their position as the only team in baseball that is expected to sell more sausages than hot dogs, enough to trace the path of their world-famous Sausage Race nearly 370 times.