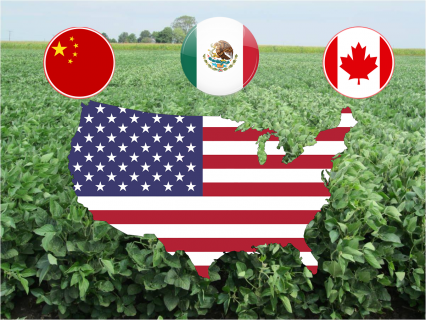 Last week Indiana farmers were in Washington to lobby for the USMCA, the trade deal that will replace NAFTA. Yet passage by Congress is anything but a sure thing. However, a trade deal with China is looking more likely. The President and most farm groups feel that the USMCA trade deal is a good deal for agriculture and for the U.S. economy. “It means a lot of jobs for our country, a lot of wealth for all 3 countries,” Trump said during a White House media briefing.

But, in an election season, everything is political, and Democrats in Congress have consistently claimed the deal needs to be changed.  House Speaker Nancy Pelosi has said she opposes the trade pact, but President Trump feels in the end, “I think Nancy Pelosi’s going to do the right thing.”  Representative Earl Blumenauer of Oregon, Chair of the House Ways and Means Trade Subcommittee, said, “I think it’s very unlikely that something is going to happen before Congress heads out of town on the August recess.”

Political pressure is mounting from agriculture and industry. A group of over 20 governors has called on Congress to pass the agreement.  In a letter dated Thursday, June 20, it says, “Nearly 25 years after passing the North American Free Trade Agreement, it’s time to update our trade policies with two of our most critical trading partners.” The governors, all Republicans, say the USMCA is a “comprehensive, twenty-first-century trade agreement” which will protect trade secrets and intellectual property, prevents corruption, prevent importation of goods produced by forced labor, and expand the agricultural market by lowering trade barriers for farmers and ranchers. Former Ag Secretary and Former Governor of Iowa Tom Vilsack who discussed  the USMCA on Monday, said, “The USMCA is not about a victory for one side of the aisle or the other or a victory for the White House. It is about securing a victory for the American farmer.”

President Trump will be off to the G-20 summit in Japan at the end of this week. He’s scheduled to meet with China’s President Xi Jinping face-to-face for a high-stakes discussion on trade, as well as other issues. While most officials don’t expect a long-awaited breakthrough yet it is possible that Trump could be talked into not putting new tariffs on even more Chinese imports. The President, however, continues to talk optimistically about a resolution of the trade dispute, “I have a feeling we are going to make a deal with China. I don’t believe that China wants to continue the problem they created for themselves.” Many trade observers question if China does make an agreement that they will live up to the terms of that agreement.