On the John Artman farm just north of Indianapolis in Boone County, harvest going into this week was about halfway completed. He says it has been a good harvest overall, but early July started to put a different spin on what looked like a garden spot for the crops.

Artman’s Co-Alliance agronomy sales specialist Dave Masten explained that an enormous amount of rainfall started a change to the outlook.

“The first two weeks in July we probably had six inches of rain, and then we went from that to you might as well say six weeks,” he said. “That kind of put a double whammy on the stress, stacked stress on top of stress, and that’s eventually manifested itself into some stalk rots, crown rots, and foliar disease in the corn. So, by this point in the harvest we’ve got some stalk lodging that’s reared its ugly head.”

Artman told HAT he’s first trying to get to the fields where the standability is in question. 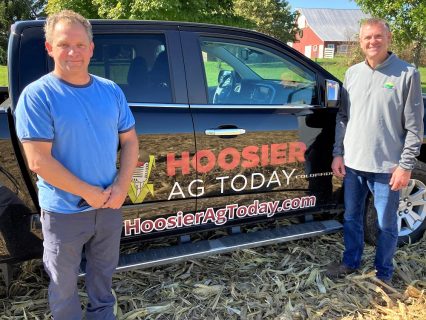 “As Dave said, a lot of it is lodging,” he told HAT. “Fortunately, we haven’t had a lot of high winds with these storms that we’ve had, but other than that harvest is going pretty good.”

As Masten explains, the John Artman and Co-Alliance partnership works well even when Mother Nature forces changes to the plan.

“We put together good plans in the middle of the winter and by the time Mother Nature throws us a curveball, we can figure out a way to change on the fly with it and make it work. There’s a lot of ways to get it done and we always manage to get it done in a good fashion.”

Check out more from the Monday visit in the HAT video.