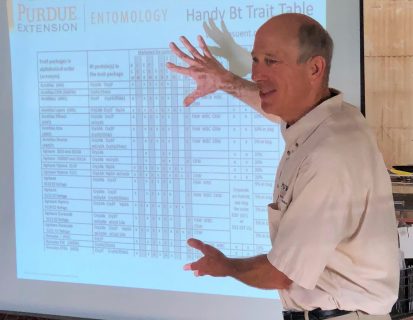 John Obermeyer is a pest management specialist with Purdue University. He says this year’s bugaboo (pun intended) was the Japanese beetle. While the population of Japanese beetles was up this year, Obermeyer says he believes some producers probably overestimated defoliation and treated for pests when they really didn’t need to.

According to Obermeyer, another thought to consider when making treatment decisions is, “Are the beetles still actively feeding? Understand their life cycle. For now, right at this present day, those populations are really tailing off because they’re naturally dying out. So, in other words, treating now is only just trying to get even with an insect that’s long gone.

“It was amazing how quickly, for one, they built up. But then then they quickly disappeared. What I was later finding as I went into the fields is they had been diseased in their population, a fungal disease believe it or not, and it spread rapidly through the population and knocked them out pretty darn quick.”

Obermeyer says if you must spray this late in the season, perhaps on double-crop beans if you see bug activity (especially feeding on the pods), you have to be very cautious of what product to use.

“You have to determine the product that you’re using and its pre-harvest interval. This is on the label. It tells you how many days from when you spray to when you can legally harvest those beans. It varies anywhere from 45 to down to just a few days. So, again, that’s something you really have to look at before choosing a product.”