Pence on the Ticket Will Be Good for Agriculture

Villwock told HAT Pence not only understands the issues important to farmers but truly has a personal passion for agriculture, “He really likes farming and gets excited talking about it. Most times I see him he has on cowboy boots.”  In a 2015 interview with HAT, after riding on a combine in Cass County, Pence said, “When I am done with public life, I would like to come back and try my hand at farming.”

Patrick Pfingsten, ag lobbyist with the Corydon Group, an Indianapolis based public affairs organization, said Pence will bring credibility to the Trump ticket, especially in the Midwest, “There is no one who has less credibility on ag issues than a billionaire from Manhattan, so having Pence on the ticket is good for agriculture.” Pfingsten said Pence may help soften the anti-trade rhetoric we have been hearing from the Trump campaign, “It is really going to be interesting to see if Governor Pence is going to be able to have an influence on Donald Trump on the issue of trade.”  He points out that Pence has been pro-trade and has participated in several trade missions. He is also a supporter of TPP and has even criticized Trump for his opposition to the trade deal.

Pfingsten adds Pence, a strong supporter of renewable fuels, will add a good deal of understanding to the Trump campaign on the RFS, “While Donald Trump is supportive of the RFS, I don’t think he knows too much about it. Governor Pence will add a lot of depth on this issue.” He said that, in major ethanol states like Ohio, Indiana, Minnesota, and others, Pence can campaign in these key states and can speak the language on the RFS issue. Immigration will be a key issue in the campaign. This is another area, according to Pfingsten, where Trump and Pence are at odds, “When he was in Congress, Pence supported a guest worker program that agriculture needs.”  This is a starkly different position than the Trump campaign has today. 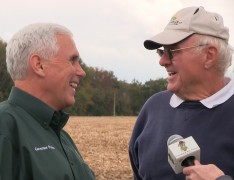 Even before the official announcement was made that Pence would be the VP candidate, the character assassination began in the media. Villwock said the public should know that Pence is a genuinely nice guy, “He is really more interested in the individual and is the kind of man you can call friend.” The Knox County farmer said Pence has the kind of personality and values with which farmers can identify.

National ag leaders expressed support for the choice of Pence.  National Cattlemen’s Beef Association Vice President of Government Affairs Colin Woodall concurred, telling the Oklahoma Farm Report that during Pence’s time on the House Agriculture Committee, he and NCBA had “a good relationship.” “He was very engaged and willing to help us on several things,” Woodall said. “We’re encouraged it’s somebody (with) their hand on the pulse of agriculture and … really probably knows what end of the cow does what.”  House Agriculture Committee Chair Mike Conaway, R-Texas, called Pence a “rock-solid guy,” but he pointed out that his opinions on agriculture may have evolved since he left Congress. “He’s now been governor of an ag-centric state, and I think he’ll have a little different perspective on how important good policy is than he may have when he was just a member of Congress,” Conaway told reporters on Thursday.

Indiana GOP Representative, Jackie Walorski, added that the prospect of having someone from her home state on a presidential ticket is exciting. “I think he represented the state of Indiana well here,” she told Agri-Pulse. “Anybody that represents Indiana knows the value of ag and how important it is to the country.”