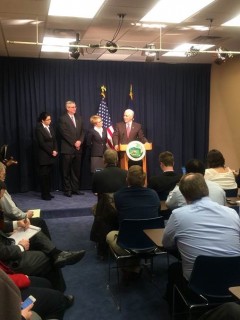 After being rumored for months, it was officially announced on Tuesday that Sue Ellspermann will be stepping down as Lt. Governor to possibly become the new President of Ivy Tech College. In her place, Governor Pence has picked Eric Holcomb to be the next Lt Governor. “Eric Holcomb is ready day one to assume the duties of Lt. Governor. He knows the executive branch, he knows the legislative branch, but most of all he knows Indiana,” said Pence. But does he know agriculture? In Indiana the Lt. Governor is also the Secretary of agriculture, yet Holcomb left that off the list in his remarks, “In the role that I will play in tourism, in rural and community affairs,  in energy, in defense, in homeland security, I am going to hit the ground running.”

Ted McKinney, Director of the State Department of Agriculture, told HAT he is not worried in the slightest about Holcomb’s ability to serve and work with the Hoosier farm community, “He is a good listener and will ramp up quickly on ag policy issues.”  He said that Holcomb has met with many Indiana farmers and local farm organizations during the past 10 months of his Senatorial campaign. “Besides that he wears cowboy boots,” McKinney added.

Holcomb, who, until Monday, had been running for the Senate seat vacated by Dan Coats, said his travels around the state have put him in touch with what Hoosiers are concerned about, “They are concerned about infrastructure and education.”  He said his goal is to build on the great work that the Governor and Sue Ellspermann have done.

Jane Ade Stevens, CEO of Indiana Soybean Alliance, Indiana Corn Marketing Council, Indiana Corn Growers Association, said that Indiana farmers appreciate the job Sue Ellspermann has done and look forward to working with Eric Holcomb if he is confirmed by the legislature. Her statement read: “Lieutenant Governor Sue Ellspermann has been a tireless advocate for Indiana agriculture. As the state’s Secretary of Agriculture, she recognized agriculture as a major economic driver for our rural communities.  During her time in office, she has worked to build international exports for Indiana ag products and provided support to our industry and our farmers. We thank Sue Ellspermann for her service and look forward to working with her in future endeavors. We applaud Governor Pence’s nomination of Eric Holcomb as Lieutenant Governor. In this new role, Eric has a commitment to the farmers in our state, and, if confirmed by the General Assembly, we look forward to working with him to promote Indiana corn and soybean farmers.”