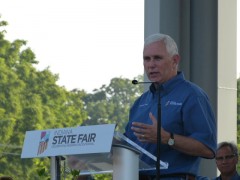 The opening ceremonies at the Indiana State Fair are typically full of pageantry, potentates, and lots of stories about the fair, the food, and fond memories.   This year all of that was still there, but there was something else. With Governor Pence in the middle of a national campaign for  Vice President, the national media spot-light was shining on the opening day of the State Fair.   For the most part, however, the Governor left politics out of his presentation and focused on agriculture as the central theme of the State Fair, “The fact that our state is synonymous with everything that is good and strong about the Heartland proceeds from the farm. That is what we celebrate at the Indiana State Fair: agriculture.”

While the Governor has questioned the value of multilateral trade deals like TPP while on the campaign trail, he did showcase the importance of trade to the agricultural sector during his opening remarks, “Agriculture is big business. Our agricultural exports represent a billion dollar industry in our state and support tens of thousands of Hoosier jobs.”

After his remarks Pence met with 4-H members at the Cattle Barn and handed out free milkshakes to fairgoers at the American Dairy Association of Indiana’s Dairy Bar. Along the way, the Governor and First Lady visited with Hoosier fair attendees.

Hoosier Ag Today coverage of the Indiana State Fair is brought to you by Indiana Farm Bureau and CountryMark.