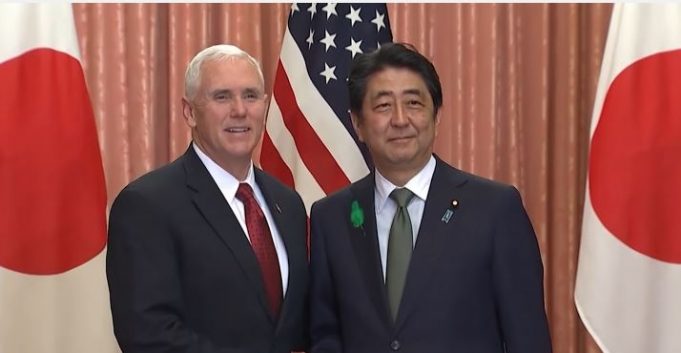 Vice President Mike Pence was in Tokyo on Tuesday, calling for “stronger and more balanced bilateral trade relationships” with countries like Japan and South Korea. His comments raise the prospect of trade talks with Japan, as well as a look into the current agreement with South Korea. Japan and the U.S. seem to have different ideas on how to take their trading relationship forward.

President Donald Trump immediately withdrew the U.S. from the Trans-Pacific Partnership agreement on his first day in office. The Vice President opened up the prospect of a bilateral agreement with Japan, a country that the president accused of unfair trade practices. The trade deficit with Japan was $69 billion last year. In the meantime, Tokyo is looking to revive the TPP without the United States.

Pence also spoke to U.S. and South Korea business leaders in Seoul, saying that the Trump administration wants to restructure the South Korea-U.S. trade deal, known as ‘Korus.’ He says the trade deficit with South Korea has doubled since the deal came into effect.