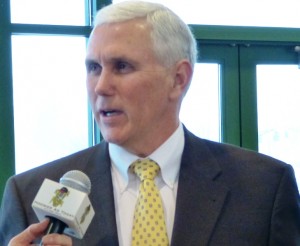 Governor Mike Pence and Lieutenant Governor Sue Ellspermann today sent a letter to both the Environmental Protection Agency (EPA) and the U.S. Army Corps of Engineers urging them to withdraw the proposed rule that redefines “waters of the United States” protected under the Clean Water Act. In October, Governor Pence joined eleven other governors in issuing a statement that voiced opposition to this proposal. “This proposed rule creates unnecessary confusion, specifically for our strong agriculture and energy industries,” said Governor Pence. “We believe that Indiana knows best how to protect its waters, and we believe that the proposed rules inhibit Indiana’s ability to manage its own affairs. We respectfully urge the Agencies to withdraw the proposed rules, re-engage stakeholders, and prepare a set of proposed regulations that provide the clarity needed while establishing an appropriate balance between state authority and federal jurisdiction.”

The Indiana Department of Environmental Management (IDEM) and the Indiana State Department of Agriculture (ISDA) also sent a letter to the EPA and the U.S Army Corps of Engineers.