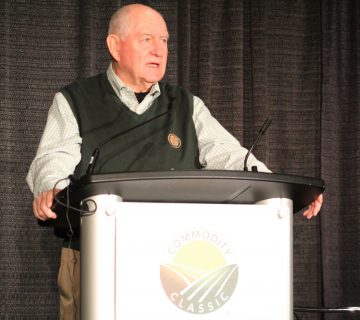 Ag Secretary Sonny Perdue addressed the hot topics from this year’s Commodity Classic when he spoke to the crowd Friday morning. He touched on trade with China, the agreement with Mexico and Canada and the 232 tariffs that remain on those countries, and year-round E15.

Perdue testified in DC last week that the EPA would not be able to get the E15 rule created before the summer driving season based on conversations with then Acting EPA Administrator Andrew Wheeler.

“Well, there’s nothing like confirmation processes to get you moving faster and he had his confirmation hearing this week, and he figured out how to get the rule done by June 1 for E15 year-round, and he was confirmed yesterday.”

As it relates to Mexico and Canada, Perdue says he’s still of the opinion that those tariffs on steel and aluminum levied against them need to be removed; however, “President Trump favors tariffs. I think I have come to the conclusion that tariffs, as a leverage mechanism, are very effective. I think he’s validated that. I think once you use that leverage, I’m working to persuade him that the leverage is no longer needed unless it’s needed for enforceability going forward. I don’t believe we need that for Canada and Mexico.”

Perdue reiterated throughout his speech that President Trump has the American farmer’s back. He shared a story from when Chinese Vice Premier Liu was in the Oval Office and agreed to purchase an additional 10 million metric tons of soybeans as trade negotiations progressed. The story was greeted with applause from the crowd.

“President Trump looked at Ambassador Lighthizer and Treasury Secretary Mnuchin, who’d been leading those discussions. He said, ‘It sounds like you all are making real progress on this intellectual property thing and technology and that’s all good, but I want you to take care of our farmers,’ and that’s a direct quote from President Trump and I appreciate it.”

Indiana and National Corn Board Member Denny Maple told HAT after the speech that he largely credits Perdue for keeping agriculture a priority for President Trump.

“He keeps reminding the president where his base came from and it’s the Midwest and the middle of the country. It’s an important segment to our nation’s economy, the ag sector, more than some people realize. We here in the Midwest understand that agriculture is important and the number of jobs that supported by agriculture, not necessarily on farm jobs, but other manufacturing jobs and so forth that is so important to this country.”