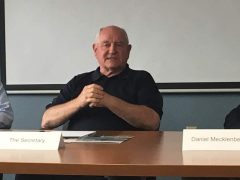 Agriculture Secretary Sonny Perdue’s announcement of a USDA Undersecretary for Trade was met with open arms by farm groups. He made the announcement to the public during a tour of a grain shipping facility in Cincinnati, Ohio, Thursday afternoon.

A group of Indiana farmers met with Perdue during the event to discuss trade and other critical issues facing agriculture. Jim Douglas, Phil Ramsey, Kendall Culp, and Randy Kron were among those in the group.

The Indiana Corn Growers Association and the Indiana Soybean Alliance, which represent the state’s corn and soybean farmers, expressed their support today for the creation of a U.S. Department of Agriculture Under Secretary for Trade and Foreign Agricultural Affairs. Jane Ade Stevens, CEO of the Indiana Corn and Soybean organizations said in a statement, 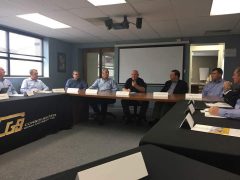 “Exports are critical to the success of our corn and soybean farmers and Secretary Perdue’s announcement is a welcome sign to our membership that the new Administration understands the importance of trade to our farmers, the farm economy and rural America. We look forward to learning more about reorganization of the USDA and its effects on our farmers and their ability to remain the most efficient providers of food, fuel and fiber.”

In a letter to Senate Agriculture Chairman Pat Roberts, Perdue said the move follows “Congress’s directive in the 2014 Farm Bill.” Congress directed USDA to establish an Undersecretary for Trade and Foreign Agricultural Affairs and to realign the Foreign Agricultural Service to report to the new trade undersecretary. Perdue also announced the creation of an Undersecretary for Farm Production and Conservation, which will oversee the Farm Service Agency, the Natural Resources and Conservation Service, and the Risk Management Agency.

The reorganization also includes eliminating the Rural Development Undersecretary, having the division report directly to Secretary Perdue. In the letter, Perdue stated: “This realignment will re-orient our approach to serving producers and improve our responsiveness to the needs of producers.”

Questions to Answer Before USDA can Establish a ‘Carbon Credit Bank’