Perdue at Purdue: Shutting Down the Southern Border

The DEMOCRATS have given us the weakest immigration laws anywhere in the World. Mexico has the strongest, & they make more than $100 Billion a year on the U.S. Therefore, CONGRESS MUST CHANGE OUR WEAK IMMIGRATION LAWS NOW, & Mexico must stop illegals from entering the U.S….

….through their country and our Southern Border. Mexico has for many years made a fortune off of the U.S., far greater than Border Costs. If Mexico doesn’t immediately stop ALL illegal immigration coming into the United States throug our Southern Border, I will be CLOSING…..

….the Border, or large sections of the Border, next week. This would be so easy for Mexico to do, but they just take our money and “talk.” Besides, we lose so much money with them, especially when you add in drug trafficking etc.), that the Border closing would be a good thing!

President Trump, via Twitter, has threatened to close the U.S./Mexico border, or large sections of it, next week. He says he will do so if Mexico doesn’t immediately stop all illegal immigration coming into the U.S.

Speaking at Purdue University on Tuesday, Ag Secretary Sonny Perdue told members of the media what this might do to the ratification process of the United States-Mexico-Canada Agreement and the overall trade of ag products to Mexico. 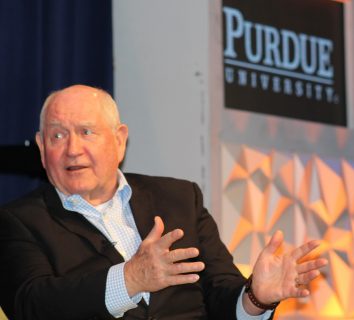 “Well, it’s not helpful. It can be certainly harmful from a trade perspective if trade is included in that shutdown. I would like to see, certainly, it not affect agricultural trade in that regard, whether it’s rail or truck, but that may be wishing for too much.”

Perdue said he understands, though, why the president is threatening to shut down the border.

“There is a crisis at the border. The Democrats continue to want to ignore that, but we’ve got essentially functionally open borders there and people filtering into this country illegally. President Trump is committed to resolve that. I think he’s right. The first obligation of a president is national security and that means following rules and having a border security policy.”

Perdue said he continues to remind the president of the concerns facing farmers today.

“I think there’s a legitimate anxiety out there when you’re talking about your livelihood. What I’ve told the president before is that farmers are true patriots, and they are, and they’re some of his biggest supporters. They’ve been very loyal, but it’s difficult to pay the bank with patriotism. We’ve got to have some solutions for them.”

Perdue’s visit with Purdue President Mitch Daniels filled Fowler Hall in Stewart Center. Many topics were covered, and we’ll have more to come from Secretary Perdue in the coming days here on Hoosier Ag Today.