Perdue Says Farmers “Keep on Keepin’ On” Despite Trade Issues 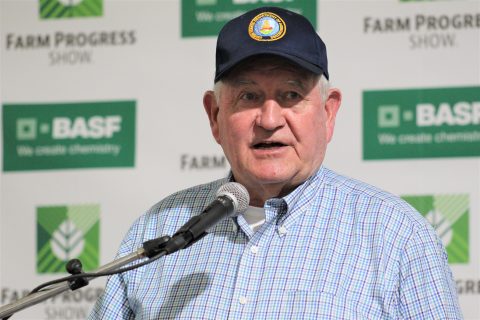 At the Farm Progress Show in Decatur, IL, Ag Secretary Sonny Perdue took the stage and took a phone call from President Trump. Via speakerphone, Trump touted the advancements in trade with Japan over the weekend and told the crowd that he could make a deal with China right now and potentially be considered a hero, but he’d rather get a deal that’s good for farmers instead of just a quick one.

Perdue was asked during a media session if he felt like farmer support for President Trump and his administration was waning.

“What I really find is the media trying to go out and discover that one person or two people that don’t like it and focus their media discussions and reports on those…Is it waning? Are people anxious still? Are people hopeful and ready for a solution? Absolutely, but I wouldn’t say it’s waning.”

Perdue said farmers are resilient, patient, and real patriots. Despite all of the trade issues we’re currently facing, “These are people that just keep on keepin’ on. I think they realize that China, not just in the last little bit but for a long time, has built their economy on the back of American innovation, and creativity, and entrepreneurship. And stolen technologies, they’ve used that to build their economy, their military, and their goal of world dominance.”

As for trade with Japan, Perdue says the agreement will brings things back in line to how they would have been with TPP.

“There may be a few sectors or industries that don’t feel like they got back to the to the finish line on that. For the most part, I think, it’s going to be equal if not better and I think, certainly, our livestock group will feel good and wheat and others, but we think it’ll be a well-received agreement.”

Perdue’s call with President Trump on stage ended somewhat abruptly. Not because of a national emergency or anything like that, it’s because the call was dropped due to poor network connectivity. Perdue quipped that that is why access to rural broadband was so critical. Unfortunately, it’s quite possible that Trump didn’t hear him.