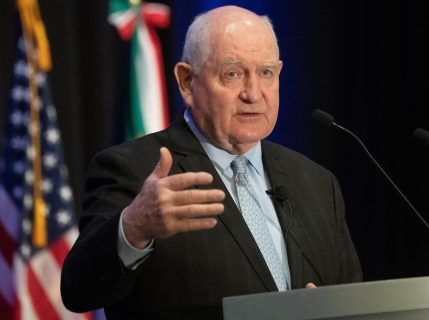 Perdue urged the ag community to “connect with the consumer” and “fight” those spreading fear of food.

“We need to be transparent, because we have nothing to hide.  We must get better at telling our own stories, rather than letting others fill in the void.  Consumers need the truth, don’t fear your food.”

“For example, our own Environmental Protection Agency follows a rigorous, science-based standard for regulating pesticides, used in food production. USDA’s own Agricultural Marketing Service runs a pesticide data program. Here are the facts. In the most recent survey in 2017, more than 99-percent of sample items, had pesticide residues that did not exceed any of the EPA standards and balances and tolerances, and more than half had no detectible residue at all.”

Perdue says bioengineered crops have even reduced the need for pesticides…and even the EU deems them safe for import, even though they won’t let their own farmers grow them.