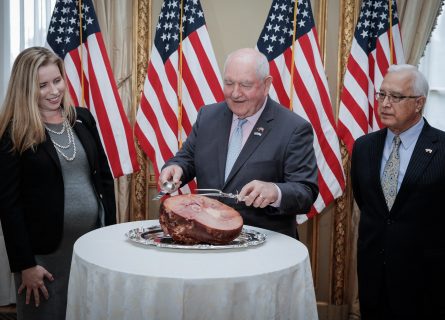 U.S. Secretary of Agriculture Sonny Perdue landed in Puerto Rico Monday for a tour of farms and to survey Hurricanes Irma and Maria damage there. Perdue spoke with reporters and assured them that U.S. agriculture will be part of trade talks with the European Union, despite recent EU Commission spokeswoman comments that it won’t.

“Frankly that’s not keeping with our understanding,” Perdue said. “The announcement between President Trump and President Juncker is these discussions would begin, and while they may love for agriculture to be outside that scope, it’s very much in our interests to address that with EU, particularly on the non-tariff barriers that they continue to promulgate.”

Perdue added that based on the difference in prices for U.S. and Brazilian soybeans, Europe and others will probably buy more soybeans from the United States than they intended, “but I also believe that there was a commitment to even try to enhance that even more than maybe normal market trends actions would have precipitated.”

There’s no doubt coming from the USDA Secretary though. U.S. and EU trade discussions will include agriculture.

“I think the talks and certainly our USTR representative, Ambassador Lighthizer definitely plan to make agriculture a topic within these discussions that are going forward,” Perdue said. “I think the truce that was called lets us see how we can have conversations for the benefit of both the EU and the United States, and for us that includes agriculture.”

Secretary Perdue arrived in Puerto Rico after a stop in Argentina where he celebrated the reintroduction of American pork products to the Argentine market after more than 20 years.

“The U.S. is the world’s third largest pork producer and a top exporter,” Secretary Perdue said. “This new market is a big victory for American farmers and ranchers. I am confident that once the people of Argentina get a taste of American pork products, they will only want more. This is a great day for our agriculture community and an example of how the Trump Administration is committed to supporting our producers by opening new markets for their products.”

The return of U.S. pork products to Argentina was sealed during Vice President Mike Pence’s visit to Buenos Aires. Technical staff from the U.S. Department of Agriculture and the Office of the U.S. Trade Representative have been working with Argentina’s Ministry on the terms of the agreement that are practical, science-based and consistent with relevant international animal health standards.

As President Trump and President Macri agreed in a Joint Statement in April 2017 in Washington, both countries are committed to further expansion of agricultural trade between the United States and Argentina.