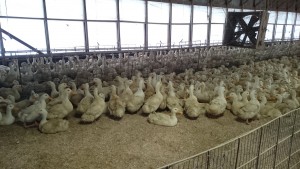 People for the Ethical Treatment of Animals has launched an attack on a Northern Indiana poultry operation. PETA videos claiming animal abuse on farms are well known for their slick, one-sided, and often misleading claims.  The video released on Tuesday about the Culver Duck farm in Middlebury has many of these elements.  The heavily-edited video  claims to be an eyewitness account of animal cruelty; however, it spends more time  preaching vegan philosophy than documenting animal abuse, “Go vegan today and enjoy all the  flavor and nutrition and none of the cruelty.”

The abuse that is shown in the video is actually not abuse but the industry standard for euthanizing poultry, says Paul Brennan, with the Indiana State Poultry Association, “Part of what they are showing is cervical dislocation which is the standard AVMA approach for euthanizing sick or dying birds. Though it may not look great on video, the practice is acctually the most humane practice and is the industry standard.”

Other practices declared as “abuse” in the video are also standard practices on almost any livestock farm. The video claims that “birds are loaded onto truck and taken hundreds of miles to be killed.”  Since there are not meat packing plants in every county, most livestock farms must truck their animals long distances to be processed.  The video claims that “birds and hung upside down and then killed at slaughter houses.” Again, a standard practice and the most humane and safe form of animal processing.

Brennan says the Culver operation recently came under new management and that the images in the video may be quite old, “There have been a lot of changes there, and it is possible some of those pictured in the video may not even be there anymore.”

While these kinds of videos are no longer producing the kind of public outcry they once did, Brennan stresses that livestock farms of all kinds make animal care a top priority because to do so is just good business.

PETE claims this information has been turned over the Indiana State Police for investigation; but in Indiana, it is the Board of Animal Health that regulates animal welfare standards on farms.  Meanwhile, PETA officials were calling Indiana media outlets on Tuesday afternoon making sure they had seen the press release and video that had been sent out earlier in the day.

ADM Helping You Get a Handle on Fertilizer Costs

Why Farmland Values are on the Rise in the Midwest