The McRib is back at McDonald’s! The saucy, tangy, tender, delicious sandwich is one that McRib fans wait for all year. Jeanette Merritt, Director of Checkoff Programs for Indiana Pork, says pig farmers are excited too.

“McDonald’s owns the breakfast menu. They have pork all over the breakfast menu, but when they come around to this time of year and launch the McRib, something that people have been waiting for, it just creates a lot of enthusiasm and pig farmers are really happy to see it on the menu.” 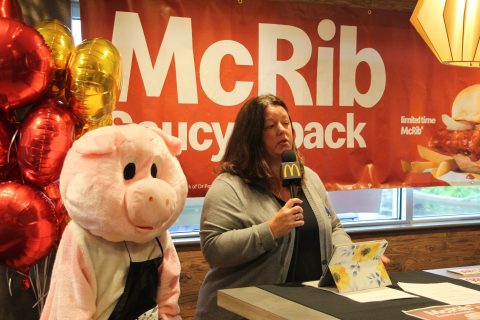 In 2018, the McDonald’s system purchased $34 million worth of raw products from the state of Indiana, including 4.5 million pounds of pork. Merritt says McDonald’s has been a huge supporter of the agriculture industry for so many years.

“When I think about this McRib, I go back to 1998-1999 when our hog markets collapsed all across the country. It was not the time of year when McDonald’s would normally have their McRib, but they were concerned, they wanted to do something, and so they brought back the national campaign to relaunch the McRib and I think that stuck with me, not only from someone involved in agriculture but as a pig farmer, for a company that wanted to do something and try to do their part to make a difference,  it really stuck with me. And so, to see a company like McDonald’s stand by our farmers and be able to sell a lot of pork on the menu, that is really great for agriculture.”

A celebration of Indiana agriculture, Indiana’s pork producers, and the return of the McRib was held at the Tipton McDonald’s on Thursday. Local owner/operator Blake Kosanovich says they couldn’t do what they do without farmers. 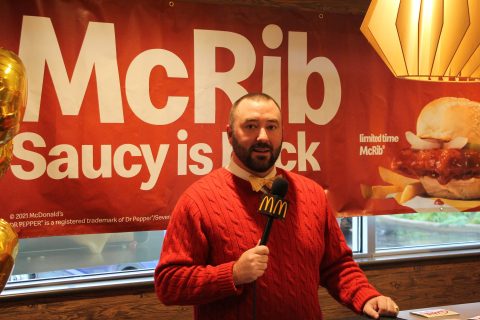 “Farmers don’t get recognized enough and say thank you. Without the farmers in all states, not just Indiana, we wouldn’t be here. How they produce, how well they do, and the standards that they have really keeps us going… We couldn’t do it without them, and just the monster support that they have for us and we have for them is what really keeps everyone going.”

The McRib is back for a limited time. Stop by, grab yours, and support Indiana’s pork producers.