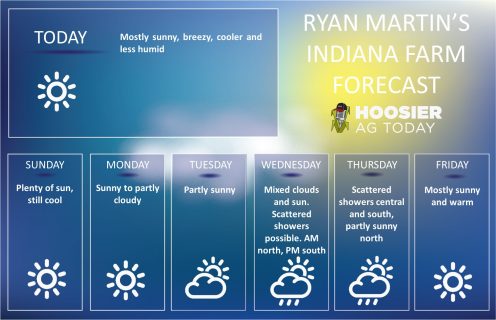 A front finally cleared the eastern Corn Belt late Friday, and behind it we see significant changes in our weather pattern, at least for a few days. Cooler, drier, and lower humidity air will dominate for this weekend and into the first day of June.

Sunshine will be the key feature each day, and temps will be a good 5-10 degrees below normal for the region. Sunday likely is the coolest day. Monday will start to see a return of south flow in the afternoon.

A few more clouds are expected Tuesday, especially in the northern part of the state, as a disturbance passes by over MI. But, we should remain rain free.

A weak trough moves through Wednesday and will be able to trigger a few scattered showers over the state. The bigger question will be if the trough leaves quickly, making for showers just one day, or if it lingers through Thursday.

Data seems to point toward a slowing of moisture in central and southern Indiana, and we are extending the chance of showers in those areas through Thursday.

Rain totals will bend up being a few hundredths to .4” in the northern third of the state but may run more .25”-1.25” in central and southern Indiana. Rain coverage the two days combined will be 85% of the state, so there are some areas that will be able to miss out.

Temps will be rising, even with the rain chances, so thunderstorms have to be watched for development – again mostly in central and southern Indiana.

We finish the 10 day period with a warmer and drier surge again. Temps climb to above normal levels for next Friday, Saturday and Sunday. We are dry, but humid those days.

Evaporation will be good and drying should be fully underway. The map below shows temperature departures from normal for next Sunday afternoon 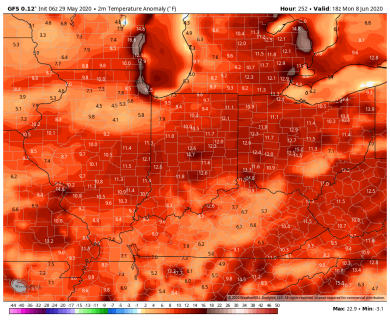 The extended period continues that warm, dry pattern for the most part. We have to watch for a minor front to try and set temps back a bit round the afternoon of the 8th into the 9th, but most of the moisture associated with that change in airmass appears to be less than .25”, with 75% coverage. Heat builds again the rest of the 11-16 day window, with the next chance of moisture coming on the 13th with .25” or less again over 60% of the state.

We expect a very dry week 3 period, with a good chance of no significant moisture from the 14th through the 20th. Temps will continue to average a good 4-8 degrees above normal. Week 4 has a front early to midweek for the week of the 21st, but will likely have .25”-.75” potential, enough to get us near to slightly below normal for precipitation that week. Temps remain warm, but a little less so on average thanks to clouds and moisture from that early week front. 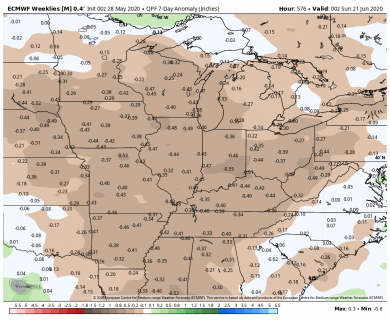 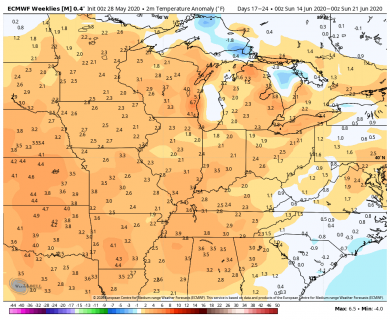 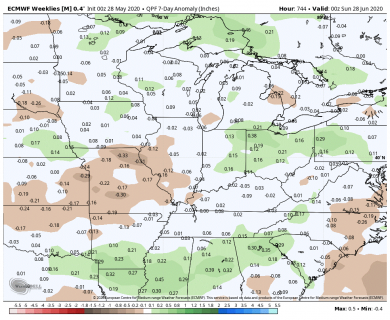 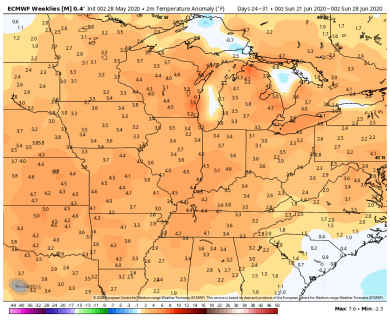