Our weather pattern will be “unsettled” for a large part of the next week. We see this more over the northern half of the state than down south, but still, we will see at least a chance of rain in the forecast over parts of the state every day between now and next Friday. That is not to say that we have rain in all areas every day…but the threat of rain exists somewhere in the state each day.

A frontal complex slowly sags through the state on Sunday.  The northern part of the state actually sees some thunderstorm chances for this still Saturday night around midnight, but then the front slowly works south. This front may try and fall apart a bit once it arrives in the southern half of the state, but we will not take rain chances out of the forecast anywhere at this time. Most of the rains for Sunday on into the overnight will produce a few hundredths to .4” with 60% coverage. The stronger thunderstorms early Sunday morning in the northern part of the state, boosting rain totals there, maybe up to an inch or more, and then we can see some thunderstorms redevelop Monday morning in west-central Indiana.

We can’t rule out scattered showers for Monday and Tuesday, but coverage will be at 30% of the state or less. Then action ramps up later Tuesday afternoon and overnight. That round of moisture can bring .05”-.5” with 40% statewide coverage.

A powerful circulation moves in for next Wednesday and Thursday with half to 2” rains likely, including some stronger thunderstorms. However, the heavy rain and thunderstorm coverage will be limited. Overall rain coverage will be 90% of the state, but the upper 2/3rds of the range will be limited to about 25% of the state. Additional rains hit the southern quarter of the state the state on Friday bringing .25”-.5”. Here is an updated map of our thoughts on rainfall potential from now through next Sunday morning. 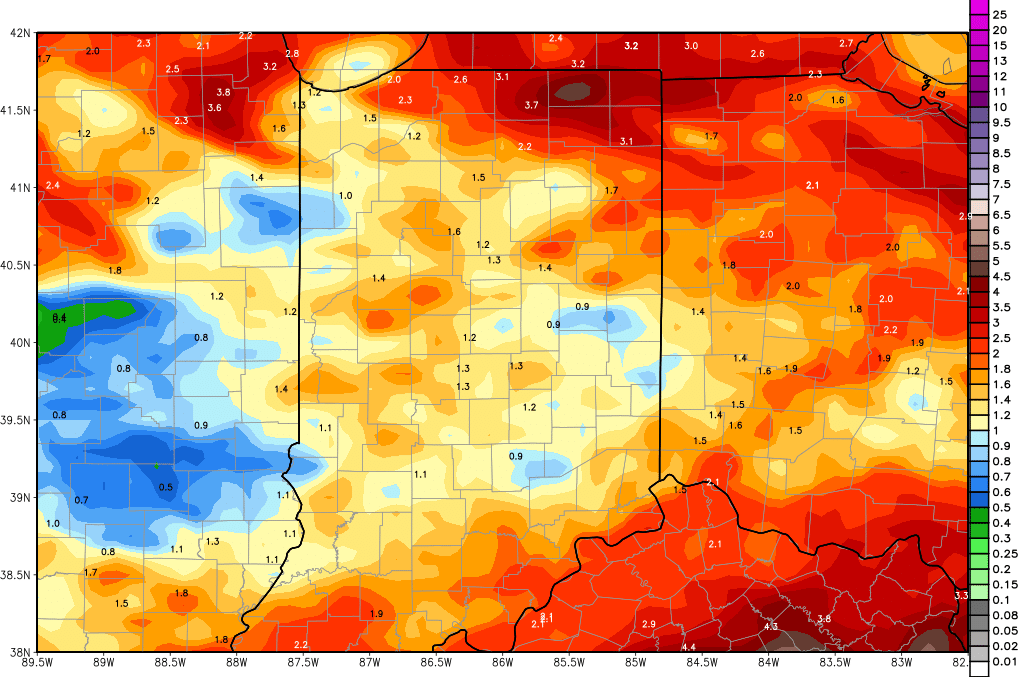 We should be dry for next weekend, but then in the extended period, we are watching a front sliding in from the west around the 21st and 22nd.  We are leaving rain totals alone with this front, looking for .25”-1” and 80% coverage, but this time around the best rains may be to the south. The rest of the extended 11-16 day window is dry to the north, but we have lingering scattered shower potential each day from I-70 southward.

Week’s 3 and 4 are relatively dry. We see one system in there around the 29th that can bring a quarter to half inch of rain, but that is basically it. Immediately after week 4’s conclusion, we see action pick up, with a strong front on the 9th of June, then the potential for a front every 3 days or so from there forward through June. Temps look to be above normal for week’s 3 and 4, and precipitation normal to below normal.