Planting progress may be difficult to attain in this next week. We do not have any significant windows of good drying for the period starting Monday and going through next weekend. In addition, we will add some significant moisture as we start the month of May off.

This weekend will be sunny, warm, and dry, and we may see some planting progress in areas that were at the very low end of rain totals this past week before the end of the day Sunday. However, clouds build quickly late Sunday night, and showers develop overnight through Monday midday. That wave of moisture brings .25”-.75”. After a 12-18 hour break, rain is back from late Tuesday through Wednesday early afternoon. That second surge brings another .25”-.75”. Thunderstorms are possible out of these batches of moisture but will not be rampant. Combined totals for the first half of the week will end up at .5”-1.5” with coverage at 90%. The best rains will be in southern Indiana

We get 24 hours precipitation free from Wednesday afternoon through Thursday afternoon. Then, a frontal boundary slides through the eastern corn belt Thursday night into midday Friday. Moisture with that front is not as impressive but will still likely have nearly 100% coverage with totals half an inch or less. What sets that round of moisture apart will be the significantly colder air that follows it into the state. We expect to be much colder Friday afternoon, and the chill stays through the weekend. We should see some sun, but the cool air mass will promote clouds and honestly, we won’t even rule out an isolated shower or two, the way things sit right now.

Next week, temps start to moderate right away. However, as the warm air lifts north, precipitation likely comes too. Southern Indiana can see scattered showers for Monday the 10th, while the rest of the state sees action hold off until Tuesday afternoon.  Overall, though, this does not lead to any more than 2-3 days of rain free weather at any point in time in the next 10 days, and with poor drying conditions even when we are rain free. This, combined with the significant rain totals combined over the next 10 days (See map), leads us to question how much we really get accomplished from Monday forward, at least this week and perhaps all the way into midmonth. We will point out, that models are dancing around all over the place and do not have significant agreement on the pattern as a whole. Some are significantly wetter, others drier. Basically…feel free to hope we are wrong and too wet in our outlook for this week! 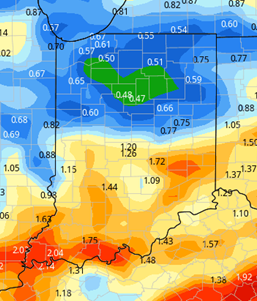 The extended pattern begins with that shower activity Tuesday afternoon through Wednesday, and that could produce .25”-1” with 75% coverage. From there, we see drier potential for Thursday the 13th and Friday the 14th, with above normal temps and southwest winds. Showers and thunderstorms could return for Saturday the 15th.

Weeks three and four are trending cooler than our recent pattern. We see temps both weeks now near normal for the time of year, rather than several degrees above. This is likely due in part to more clouds. We see week 3 above normal over most of Indiana for precipitation, and week 4 will be normal to above. This may mean we see some challenges to long term dry windows to continue planting at anything more than a normal to slower than normal pace. 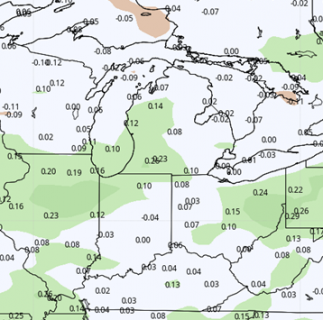 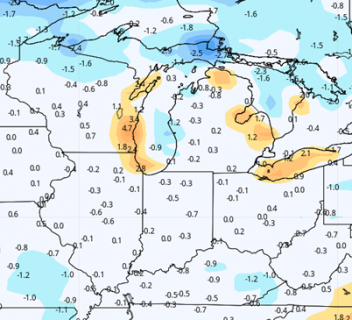 Precipitation (green: above normal, brown: below 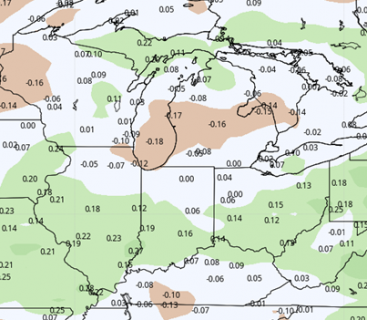 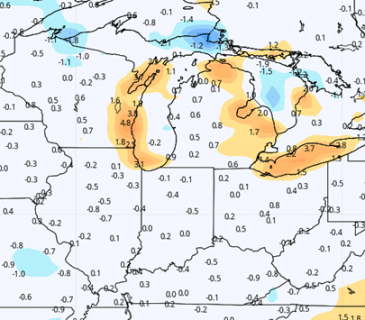 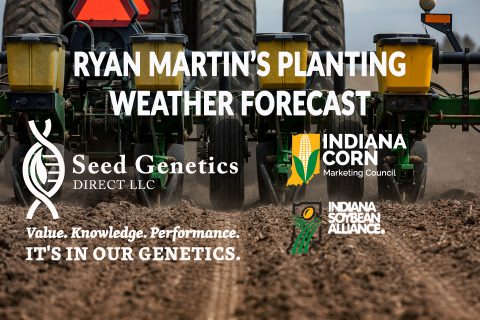