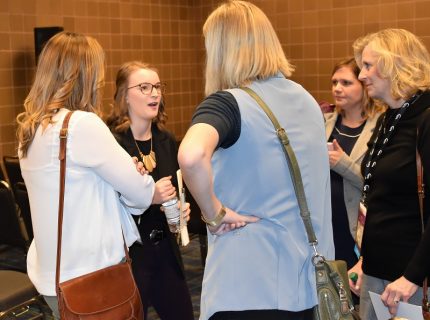 The Indiana representatives in the American Farm Bureau Young Farmers & Ranchers competition in New Orleans during the annual convention did not advance as they had hoped, but a common thread through the years for these under-35 members of Indiana Farm Bureau is that they learn more about themselves, their spouses who participate with them, the benefits of Farm Bureau involvement, and the support they receive from fellow Indiana members.

This year the Discussion Meet winner in the state was Marissa Mikel from the very urban Marion County.

“I came from a very rural area of Indiana up in LaGrange County and I went to Purdue for the College of Ag,” she said. “I have a very strong passion for agriculture and surprisingly there’s a lot of it in Marion County, and being able to connect on that urban ag level and stay involved is definitely a passion of mine because there are so many who don’t realize the amount and the importance of urban ag and the importance of ag education in urban areas.”

The Achievement Award winners were Neal and Lydia Wolheter of LaGrange County, and representing Indiana in the Excellence in Ag category at AFBF were Jonathan Spaetti and his wife Derika Lynam-Spaetti from Spencer County. She told HAT Jonathan received valuable experience in public speaking during the process.

“I’m a high school math teacher, so I’m used to getting up and talking to students and staff and the public and parents,” she told HAT in New Orleans. “I would say the biggest growth I probably saw from Jonathan, he does not like talking in front of people, he does not like giving a presentation, and I was very proud of him. I thought he did a great job. He was definitely a little nervous, and so was I, but I know a few who have followed us for many years in Farm Bureau have also complimented him on how far he has come on his public speaking and more willingness to get up in front of a group of people.”

Jonathan farms fulltime with his father and uncle. Discussion Meet winner Mikel is beginning her first session as a legislative assistant for the Republican caucus at the statehouse including work on the agriculture and environmental committees.

In addition to cash and other prizes, the winners received expense paid trips to New Orleans for the AFBF convention.