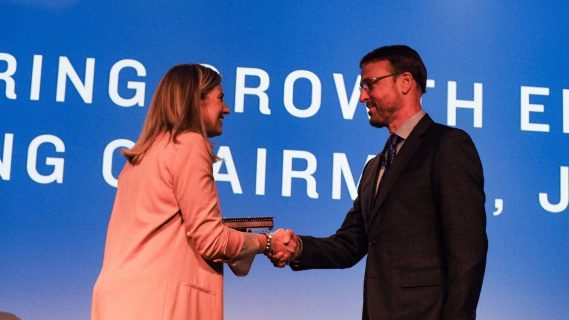 During the organization’s 11th Annual Executive Leadership Conference, Growth Energy CEO Emily Skor honored POET Founder and CEO Jeff Broin as The American Biofuels Visionary. Tom Buis, who previously served as CEO of Growth Energy, joined Skor on stage to present the special recognition, which was awarded in tribute to a lifetime of leadership that has fueled the growth of America’s entire biofuel sector.

“Jeff Broin’s unwavering leadership and transformative vision for U.S. biofuels has touched the lives of every American, from farm families in South Dakota to New York motorists,” said Skor. “As founding chair of Growth Energy, he followed in the footsteps of other great American founding fathers, building an enduring legacy that will shape the future of homegrown energy for generations to come.”

“I am honored and humbled to receive this thoughtful recognition from Growth Energy,” said POET Founder and CEO Jeff Broin. “Helping to found and grow this organization has been a true labor of love for me, going back to my roots on the family farm. While we have won many battles, the war is far from over. I will continue to work with the biofuels industry and agriculture to drive biofuels to new heights in the years to come.”

In addition to his work with Growth Energy, Broin is the founder and CEO of POET Biofuels, where he turned a humble family business into the world’s largest ethanol producer. His efforts have guided the industry’s most groundbreaking victories, from smashing the blend wall to capturing global markets.

To commemorate those achievements, Broin was presented with a handcrafted box, which carries the image of Howard Chandler Christy’s 1940 painting, “Scene at the Signing of the Constitution of the United States.” The iconic painting, which hangs in the U.S. House of Representatives, captures the optimism and courage of leaders like George Washington and Alexander Hamilton.

“Our own founding father, Jeff Broin embodies that spirit, and I’m so proud to recognize his contributions to our industry with this award,” added Skor.