Policy Over Products on Day 2 of Farm Progress Show 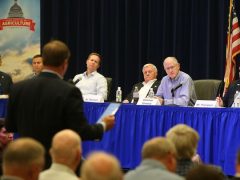 Agricultural policy took the spotlight over agricultural products on day 2 of the farm Progress Show in Decatur, IL. The leadership of the U.S. House Ag Committee held a Farm Bill listening session to get farmer input on what should be in the next Farm Bill. Committee Chairman Michael Conaway and Ranking Member Collin Peterson along with several other committee and members of the committee listened to several hours of testimony from Illinois farmers on what their priorities are for the next Farm Bill. “There is no better place to gather insight and feedback about the challenges in farm country and how we can improve ag policy in the next farm bill than right here in Decatur. I appreciated hearing the heartfelt comments of so many producers and thank everyone who was able to join us today,” said Chairman Conaway.

“Today’s listening session was a continuation of the Agriculture Committee’s efforts to hear directly from the varied interests, across all regions of the country, who are impacted by the farm bill. The Committee will be able to take this information back to Washington to help us write a new farm bill that addresses current challenges,” said Ranking Member Peterson. 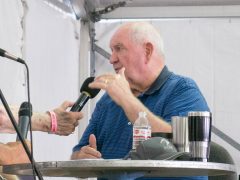 Meanwhile, Secretary of Agriculture Sonny Perdue was touring the farm show and spoke to a large audience at the ADM tent. He tried to reassure farmers who are worried about the Trump administration’s stance on trade, “The President fully understands what we have on the line in agriculture when it comes to trade.” He said the President wants trade agreements that are balanced and fair to both the agricultural and manufacturing sectors of the U.S. economy. “I am hoping we can get new trade deals, including NAFTA, to the satisfaction of our ag community,” Perdue added.

The Secretary also lashed out of Congress for the lack of confirmations of top USDA officials, “I needed Steve Censky, on board as my deputy 2 months ago. I have also nominated Ted McKinney as our Undersecretary for trade out here on the million mile club right away, knocking on doors all over this planet finding place we can sell our agricultural products.” 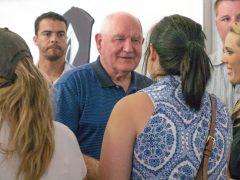 Perdue said he is trying to reform and transform the USDA but the lack of quick Congressional action is slowing this process, “We would not have a rural development leader if I had waited for the Senate to confirm one. But I have Anne Hazlett from Indiana on the job, and she is making transformative changes in rural development programs and is helping to lead this inner agency task force on rural prosperity.” The Secretary also outlined the efforts and resources the USDA has in place for providing help and assistance to the farmers and rural communities in Texas hit by the hurricane and catastrophic flooding.

While at the farm show, Perdue met with several farm group leaders and discussed particular aspects of farm policy including possible changes to the farm safety net.