The pollination window may be a bit wider than normal this year since we planted part of our corn crop in April and part of it in late May. But overall in the Eastern part of the state, early corn pollination is going well, says DuPont Pioneer agronomist Eric Miller, “Corn pollination is underway in most fields and is progressing without any major problems.”  He said timely rains in most areas in the past week has set the crop up to face the warmer conditions that are coming this week. 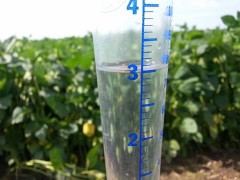 Miller says the rains that came last week and over the weekend  relieved some dry areas in extreme Eastern Indiana, “Blackford, Jay, and Randolph Counties were very dry, but rain last week really helped those crops.”  He expressed concern, however, about SE Indiana counties. Like much of Southern Indiana, too much water has been the issue this year, and rains this past weekend exacerbated the situation.

While there are some weed issues, Miller says, for the most part, things are better than they were last year. He also said encirca models have been showing plenty of nitrogen in fields and his observations would confirm that.