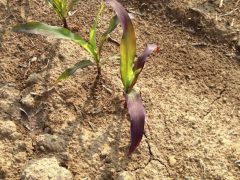 For many areas of the eastern Corn Belt, a great deal of corn has been planted over the past few weeks. Some corn has emerged and is in the early stages of growth. One phenomenon that commonly occurs at the early stages of the growing season is the appearance of purple corn plants. Corn plants can turn purple for several reasons related to environmental factors such as:
• Sunny days and cool nights (temps in the 40s to 50s F)
• Soil pH lower than 5.5
• Cool temperatures
• Wet soil
• Stresses that hinder the uptake of phosphorus
• Herbicide injury
• Soil compaction

When saturated soils and cooler weather occur, producers may see some purple plants in their fields. Purpling in corn due to cooler weather most often occurs when plants are in the V2 to V5 growth stages. Because of diverse genetics, hybrids react differently to early stress and some will exhibit purpling while others will not. Anyone who has walked a test plot to observe early plant vigor or has split their planter between two hybrids has probably seen a side-by-side comparison where one hybrid turned purple while the other did not.

The biggest concern for corn growers is usually about whether or not plants that turn purple will diminish corn yields. If the purpling is caused by a temporary stress (sunny days and cool nights, cool temperatures, wet soil, etc.) it will disappear when soils dry out and temperatures increase allowing for normal corn development. Temporary stresses generally do not affect yield. However, if the purpling is symptom caused by a problem that doesn’t go away with a change in the weather (soil compaction, herbicide injury, etc.) yield could be negatively affected.
Have a great week! 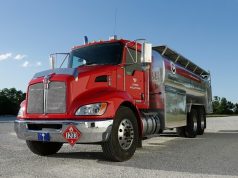