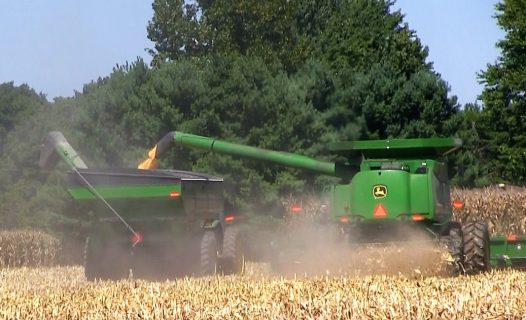 In the new Harvest Weather Forecast with HAT Chief Meteorologist Ryan Martin the near-term outlook for harvest operations is more predictable than an uncertain extended outlook, but there are periods of dry and rain in both versions. In the nearby forecast Martin says a small disturbance is trying to move through the western and central Corn Belt now through early Saturday.

“Most of this is going to glance by to the north up by the Great Lakes region, but we think a little bit of moisture, a little bit of cloud cover may try to sneak down into northern parts of Indiana over the morning hours of Saturday and maybe again early hours of Sunday.” Martin added, “U.S. 24 northward may be looking at a few spits and sprinkles before going back to full sunshine. The rest of the state has no problems.”

Next week he says more rain is possible and higher temperatures are likely.

“Temperatures are going to be climbing a little bit as we go into the early part of next week,” he said. “We do have a wave of moisture that comes across the state Tuesday into early Wednesday and at this point it doesn’t look to be too over the top. Maybe a quarter to half an inch in most areas. Thunderstorms are not part of this and that’s why rain totals are not all that high.”

Wednesday and Thursday should be dry but then the uncertainty really comes into play, but harvest could be delayed.

“Once you get into Friday you see another little minor trough trying to sweep across the Great Lakes and Corn Belt regions, so I’ll put a few scattered showers in for Friday night into early Saturday morning. I think we’re looking at totals mostly a few hundredths of an inch to a quarter of an inch or less, but still it’s going to be some moisture that probably slows harvest for at least a short period of time.”

In the coming week to 10-day period temperatures will be normal to slightly below, but brief above normal periods are likely with each wave of rain Tuesday and Thursday through Friday.