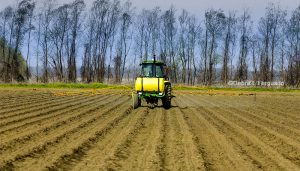 Pre-emergent Herbicides have proven to be the best option for weed control in 2017. This spring, heavy and frequent rain not only delayed planting but kept many growers from getting their post-emerge weed control programs going. As a result, many found their fields with large and hard to control weed populations. Dave Johnson, with DuPont Crop Protection, says pre-emerge products proved to be the right choice in 2017, “Not only do they control the weeds early and get the crops off to a good start, if you have rain for several weeks at least you have something out there to control early weed pressure.” He added 2017 was a good example of this as growers could not get into their fields to spray, but the rain kept the weeds growing. “I think the real lesson from 2017 is that residual herbicides can really pay off with conditions like we had this spring,” he stated.

Johnson added that one of the keys to weed control is controlling weeds when they are small, “They give you some early season control and help keep the weeds small.” His advice for growers is to take good notes this fall as a guide for next spring.