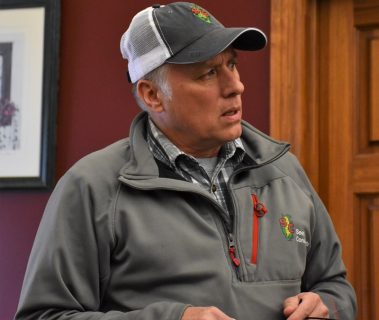 At seed company winter meetings agronomists have plenty of tips just ahead of the spring planting season, and one of those is make sure your planting populations are correct. Higher populations don’t automatically pay for themselves and can actually lead to lower yields.

Bill McDonald with Seed Consultants said their fixed ear hybrids are benefiting from higher populations, but flex, semi-flex and full-flex are demonstrating flat to decreased yields from over population.

“We have one variety that is an extremely fixed ear, and as the population goes up the yield will go up,” he explained. “It just goes right along with it and you can afford to plant a little higher populations and get a return on your investment. If you take a flex ear or a full flex ear and you increase that population, your yield actually could go down or stay flat. Either one of those is not a good day because that extra seed costs you money.”

McDonald is concerned about potash deficiency in soybean fields and his concerns were confirmed after receiving tissue sampling from labs in both Ohio and Indianapolis.

“We’re actually showing deficiencies in the potash levels. A lot of people will fertilize their corn and then let that corn fertilizer that’s left over, leave that out there for the beans and expect the beans to be a scavenger. If we want bean yields to increase, then we need to treat the bean like it is another crop. Fertilize your corn, fertilize your wheat, fertilize your beans.”

He said a lot of farmers don’t want to pay the extra application cost, but McDonald said they’ve seen returns on investment for potash fertilizer more than offset the cost of that application.

Bill McDonald is the director of agronomic services for Seed Consultants.