Favorable weather and soil conditions for planting during the last two weeks of April allowed many growers to get their soybeans planted relatively early this year in many parts of Indiana.  However, over the last 10 days, most of the State has experienced colder air temperatures and frequent precipitation, which slowed down soybean planting progress.  Approximatly 36% of the State’s soybeans were planted by May 10th, which is on par with average.  The cold, wet weather that followed soybean planting is not ideal for soybean emergence, and increases the likelihood of herbicide injury, especially for fields treated with PPO-inhibiting herbicides (group 14).

The group 14 class of herbicides create oxygen radicals at toxic levels that destroy the lipids of cell membranes and create the necrotic spotting and burning that most of us recognize as leaf burning and blazing.  These herbicides can be applied to soybean plants because of their ability to rapidly metabolize the herbicide and reduce the levels of toxic radicals when soybeans are actively growing.  However, under stressful growing conditions, such as cold, wet weather, soybean plants are unable to metabolize these herbicides as quickly leading to injurious levels of oxygen radicals.

Wet soil conditions and frequent rain events following soybean planting are ideal for soybean injury by soil applied group 14 herbicides.  The sustained cool, wet, soil conditions that soybean plants emerge in are less than ideal for rapid herbicide metabolism and thus lead to injury to some fields receiving one of these herbicides.  Soybean injury may also increase due to heavy rainfall events that splash herbicides on the soil surface onto emerging soybean hypocotyls, cotyledon, and/or leaves depending on the soybean growth stage.  Injury symptoms include crinkled leaves, necrosis of the hypocotyl and cotyledons, and necrotic spotting on leaves where the herbicide has been splashed during a rainfall event.

Typically, the risk of injury is higher in sandy and coarse soils and/or soils with low organic matter, although injury may occur in all soil types if extreme weather conditions occur.  In the majority of cases, soybean plants are able to grow out of the initial injury and stunting and yield losses should not occur.  Only in rare cases of severe injury to the hypocotyl and/or growing point will replanting be required.  Fields should be considerd for replanting if significant stand losses occur from the combined herbicide, cold injury, drowning, seedling diseases, or any combination of these four factors that has occured.  If you suspect injury from flumioxazin, sulfentrazone, or saflufenacil, or seedling diseases on soybean you can send a sample to Purdue Plant and Pest Diagnostic lab (https://ag.purdue.edu/btny/ppdl/Pages/default.aspx) for further confirmation.

The increased amount of soybean injury may cause some to avoid soil-applied herbicides.  We have seen exceptional weed control out of these group 14, PPO-inhibiting herbicides at our marestail, waterhemp, and Palmer amaranth research sites. And what Bill likes to tell growers is “if they cause some visual symptomology to the soybeans, you know they are working on the weeds as well.” So users of group 14 herbicides need to weigh their tolerance to temporary injury against quality control of problematic weeds such as Palmer amaranth, common waterhemp, and marestail.  In the majority of years these products pose little threat of soybean injury and offer good control of some of our most problematic weeds. 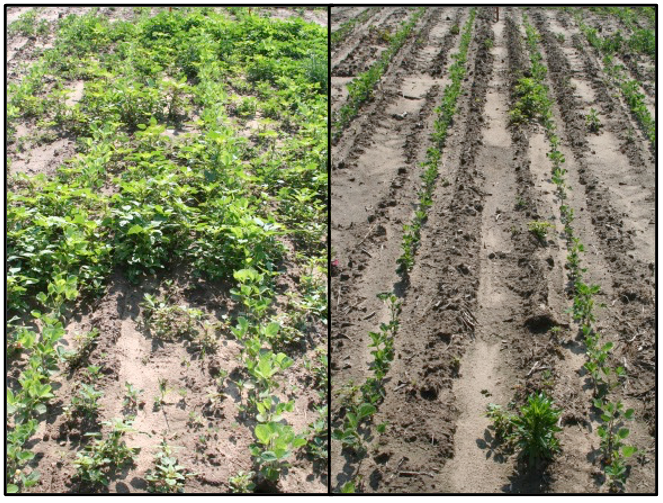 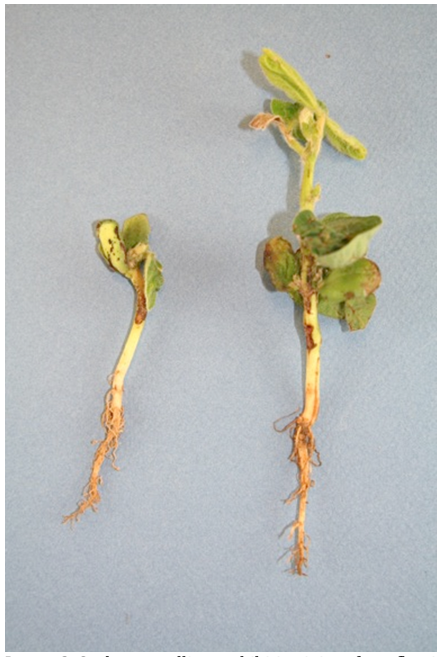 Image 2. Soybean seedlings exhibiting injury from flumioxazin due to slowed metabolism and herbicide splash on the hypocotyl, cotyledons, and unifoliate leaves.