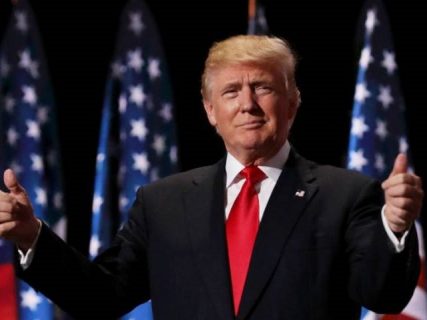 President Donald Trump spoke with Mexican President Enrique Pena Nieto on his speaker phone in the Oval Office to announce that a preliminary agreement has been reached between the two countries on trade. Trump said he wanted to get rid of the name “NAFTA” because of the bad connotations associated with it, instead calling it the “United States-Mexico Trade Agreement.” He said he would be calling Canadian Prime Minister Justin Trudeau soon to reopen negotiations between the US and Canada.

Trump says Canada wants to negotiate “very badly”. He adds that one way or another we’ll have a deal with Canada. “It’ll either be a tariff on cars or a negotiated deal.”

“President Trump is delivering on his promise to renegotiate the old, outdated North American Free Trade Agreement (NAFTA), making good on his pledge to strike the best deals possible for all of our economic sectors, including agriculture. The President has achieved important improvements in the agreement to enable our agricultural producers to be treated more fairly. This breakthrough demonstrates that the President’s common-sense strategy of holding trading partners accountable will produce results. President Trump and Ambassador Lighthizer, our U.S. Trade Representative, are to be congratulated for their determination, vision, and leadership.

“The agreement specifically addresses agricultural biotechnology to keep up with 21st Century innovations. And we mutually pledge to work together with Mexico to reduce trade-distorting policies, increase transparency, and ensure non-discriminatory treatment in grading of agricultural products.

Reaction from the nation’s major corn, soybean and grains organizations in general was positive, with caveats though. They want to see movement with Canada on trade as well and hope for a tri-lateral outcome before any cancellation of the original NAFTA.

“NAFTA has been an unequivocal success story for American agriculture, dramatically expanding market access for all parties, integrating supply chains and providing economic opportunity to farmers and rural communities,” said National Corn Growers Association President Kevin Skunes. “Mexico is the largest export market for U.S. corn farmers and we are pleased the United States and Mexico are reaffirming mutual commitment to this important relationship.

“Farmers across the country have been closely following NAFTA negotiations and NCGA welcomes the opportunity to evaluate the details of this agreement with Mexico. However, the trilateral relationship is important, and we urge President Trump not to terminate the underlying agreement until full trilateral negotiations have been concluded and a new agreement is secured. This new agreement has the potential to deliver the economic certainty rural America needs, prematurely terminating the existing agreement would only undermine that potential.”

Soybean growers’ leadership said renewal of NAFTA looks more promising after the Mexico announcement Monday. American Soybean Association (ASA) President John Heisdorffer said, “We need NAFTA and new free trade agreements to build and ensure the certainty of our markets for soy and livestock product exports. Approval of NAFTA would be a big step in the right direction for us, with the uncertainty and market loss resulting from China’s tariff on U.S. soybeans. We are hopeful that a new NAFTA agreement will set the tone for more trade agreements to come.”

Added U.S. Grains Council President and CEO Tom Sleight, “We are grateful for news today that the United States and Mexico have reached an agreement that will keep NAFTA modernization efforts moving. This agreement is a major step forward for our relationship with Mexico and is a result of hard work over the last year to closely examine our vital partnership.

“Mexico is extremely important to every sector we represent. Yet, so too is Canada, our second largest ethanol market and a top ten corn market. We hope the agreement today opens the door for Canada’s re-engagement, and we continue to oppose withdrawal from the existing NAFTA under any circumstances except the adoption of a new, beneficial and trilateral pact.

“We look forward to analyzing the provisions the United States and Mexico announced today and continued work toward the goal of an improved trilateral agreement.”

In a statement, House Agriculture Committee Chairman K. Michael Conaway (TX-11) said, “I’m very encouraged the president and Amb. Lighthizer have reached a preliminary agreement with Mexico to modernize and expand market opportunities in NAFTA. I look forward to reviewing the details to ensure production agriculture’s interests and priorities are well served. Mexico and Canada are key agricultural trade partners – but for a trilateral agreement to succeed, we need all three parties to engage in the process. I call on Canada to resume its seat at the table so we can ensure that a strong, modern agreement among our three nations can be finalized as quickly as possible.”