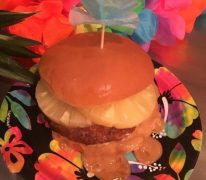 Just two weeks from Friday when the Indiana State Fair opens again, new featured foods will be available throughout the fairgrounds. That’s as it should be when you realize the 2017 fair theme is THE WONDERFUL WORLD OF FOOD. The Indiana beef producers will be selling the Cattlemen’s Choice, a ribeye steak topped with smoked beef brisket. And Indiana Pork has quite a pork burger entered in the Indiana State Fair “Taste of Indiana” contest.

“This year the Indiana pork producers decided that our Peanut Butter Pineapple Pork Burger would be our featured menu item for the Indiana State Fair,” explained Jeanette Merritt, Indiana Pork’s Director of Checkoff Programs. “We went through a lot of taste testing with a lot of different ideas and this is the one that won. Our staff and our concessionaire managers picked this one, and strangely enough it sounds like an odd combination, but it is a great pairing and I think people who go to the fair are going to want to stop by and purchase it.”

She says the combination of peanut butter and meat is not totally new.

“I have never had peanut butter on a pork burger when I’ve been in a restaurant or out to eat anywhere, however, after we developed this idea we have heard of some restaurants around Indiana, including the Triple XXX Root Beer in West Lafayette and I think Scotty’s in Indianapolis and some of their locations around the state put peanut butter on a hamburger. This idea is somewhat like a Tai dish because sometimes you’ll see noodles with peanut butter and pork in it, and we thought throwing the pineapple and all of it together would be a great combination.”

The Peanut Butter Pineapple Pork Burger will be available at all three Indiana Pork tents during the fair.

If you plan on dessert following your main meal, the Dairy Bar has a brand new milkshake.

“This year’s new milkshake will be the root beer float milkshake,” said Jenni Browning with American Dairy Association, Indiana. “That’s exactly what it tastes like just like your favorite root beer float. We try to do a new shake each year but we’ll still have our old favorites back, strawberry, vanilla and chocolate, but if you are a root beer float fan you’ll enjoy it.”

Browning added the flavor is mild enough that you might even enjoy if you’re not a particular fan of the standard root beer float. 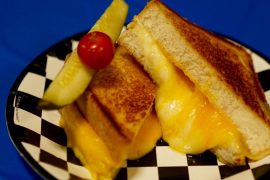 “It was the winning grilled cheese sandwich from the Ultimate Grilled Cheese contest at the state fair last year, and the creator of this grilled cheese is Andrew Kuehnert, a dairy farmer from Fort Wayne, Kuehnert Dairy Farm. His creation is on Texas toast, has Colby cheese, cheddar cheese and Havarti.”