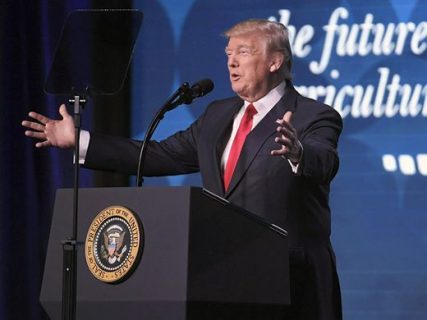 President Trump will address the nation’s farmers at the American Farm Bureau Federation’s 100th Annual Convention in New Orleans. The President’s address is during the closing general session Monday afternoon, and news of the unexpected guest came as a surprise to Louisiana Farm Bureau President Ronnie Anderson.

“We thought that Vice President Pence was coming to address the group on Sunday, but that was news to us about Trump coming,” Anderson said. “It’s a good time for him to be here. With the problems with trade negotiations and border wall and labor and everything else going on, it’s an ideal time for him to address the farmers of this country over all these issues.”

This will be the second year in a row that President Trump has attended the American Farm Bureau convention. Anderson says that tells a lot about the President’s commitment to agriculture.

“I can’t remember anyone coming two years back to back. We’ve had presidents come before, but for him to come two years in a row I think he realizes the importance of agriculture to the economy and trying to work on explaining some of the things that are going on and hopefully give us an idea about when these negotiations will be wrapped up.”

AFBF President Zippy Duvall, a beef and poultry farmer from Georgia, added, “The American Farm Bureau Federation is honored once again to host our nation’s president. President Trump has made agriculture a clear priority, giving farmers and ranchers a seat at the table on the top issues affecting our farms, ranches and rural communities. What better way to celebrate 100 years of Farm Bureau than to welcome the president of the United States to our centennial celebration?”