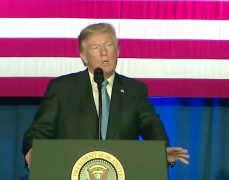 President Trump came to Indiana Wednesday to unveil the new Republican tax reform framework. He mentioned many times the plan will simplify the tax code and cut tax rates. It also brings about change farmers have been clamoring for.

“To protect millions of small businesses and the American farmer, we are finally ending the crushing, the horrible, the unfair estate tax, or as it is often referred to, the death tax,” Trump said to sustained applause.

The President shortly thereafter introduced Indiana farmer Kip Tom from Leesburg in Kosciusko County. Tom’s farm has been family owned for 187 years. He wants it to stay in the family.

“That’s a long time,” Trump said. “But that heritage could come to an end because of the death tax or the estate tax and could make it impossible for him to pass that legacy to his wonderful family. We’re not going to let that happen.”

Tom has helped the Trump administration formulate tax plan details, and he was thrilled to hear the roll out in his home state.

“I tell you what, it’s an exciting day for all Americans with the proposed tax cuts that hopefully are well received by both Democrats and Republicans to make sure that we can move our country forward,” Tom told HAT.

The President spoke inside the Farm Bureau Building at the Indiana State Fairgrounds.

Reaction from the agriculture industry was very positive. Craig Uden, President of the National Cattlemen’s Beef Association, said cattle producers are “very pleased that President Trump and Republican leaders in Congress have maintained their long-standing commitment to American agriculture by including a full repeal of the onerous death tax.”

“The people of American agriculture work hard every day to provide food, fiber, and fuel for their fellow citizens, so they shouldn’t be overburdened by the tax collector as well,” he said. “Most family farms operate as small businesses, with the line between success and failure frequently being razor thin. Add to that the complexity and costs of merely complying with the tax code, and their budgets are stretched even tighter. On top of it all, the unfair ‘Death Tax’ can cause too many family farms to be broken up and sold off to pay the tax bill, undoing lifetimes of toil and preventing further generations from carrying on. President Trump is right to push for reform and reductions in the tax code—an overhaul that is long overdue.”