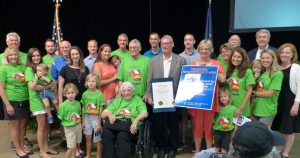 More farm families have been recognized for long term commitments to Indiana agriculture. Twice a year the Indiana State Department of Agriculture honors families who have owned their farm for 100 or more consecutive years. The newest group of Hoosier Homestead award recipients gathered Friday at the Indiana State Fair.

Cricket Houze was one of the many Johnson family members representing the Auburn farm in Dekalb County receiving a Centennial award.

“We live back a mile lane,” she said in an emotional reflection on the family farm’s history. “It’s been in the family a long time and it’s a very unique property, so our nearest neighbor is almost a mile away. My dad was a city slicker and decided to farm with my grandpa and grandma, and viola, here we are! One hundred fifteen years in the family and it’s incredible because that’s not really your focus growing up. In fact, it’s always what the heck let’s leave the farm! But when you look back you realize the value of all the gifts it gives you growing up.”

She said the farm started out as a dairy farm but then began to focus on hogs. There were chickens too.

“We had 750 layer hens so we raise eggs and about 650 hogs and over a thousand acres of land in the farm that was not all together. It was split east and west side of Auburn. So, we grew grain and actually grew for a long, long time, certified seed for Purdue. We were closely tied to Purdue and trying out their new hybrids.” 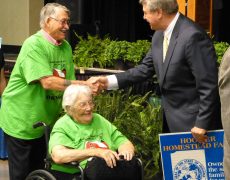 Houze said her brother Jeff and his son operate the farm now, and their 90-year old mother and father, Donald and Lenora, were beaming as they received the recognition from ISDA director Ted McKinney and ISDA Deputy Director Melissa Rekeweg.

“I’d just like to thank the state for doing this,” Cricket told HAT. “This is a really special, special time for my folks.”

Hear more in the HAT interview:Cricket-Houze-on-Johnson-Family-Farm

To be named a Hoosier Homestead, farms must be owned by the same family for more than 100 consecutive years, and consist of more than 20 acres or produce more than $1,000 of agricultural products per year.

“There’s a certain reverence when it comes to generational farming in Indiana – it’s a way of life,” McKinney said. “These families produce the food, fuel and fiber we need to go about our daily lives, and it’s important to recognize those that have been carrying on this noble and vital tradition.”