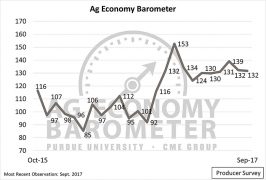 “Although the decline in the Index of Future Expectations was modest, it could be an indication that some of the optimism that surfaced among producers in late 2016 and early 2017 is eroding,” said Jim Mintert, director of Purdue’s Center for Commercial Agriculture and principal investigator for the barometer. “One of the drivers of the jump in producer sentiment after the 2016 U.S. presidential election was a sharp increase in expectations about the U.S. economy. But the last two times the barometer survey has posed questions about the overall economy, respondents were noticeably less optimistic.”

For example, on the September survey, just 40 percent of the respondents said the U.S. economy was likely to expand, a decline of almost one-third from March when nearly 60 percent said they expected expansion.

Another topic on the September survey was trade agreements and negotiations, specifically the North American Free Trade Agreement, or NAFTA. The survey asked respondents whether NAFTA has been good or bad for the U.S. economy and, separately, for U.S. farmers and ranchers. In both cases, more producers than not reported that the agreement had been good. In the case of the U.S. economy, 52 percent of respondents said they thought NAFTA had been good. Fifty-nine percent reported that they thought the agreement had been good for U.S. farmers and ranchers.
In contrast, back in February, 93 percent of respondents said trade was important to the U.S. agricultural economy and 80 percent of producers said trade was important to their farms.

The differences among the responses to the more general trade questions and those that focused specifically on NAFTA suggest there is some uncertainty among producers about the impact of NAFTA, Mintert said.

Moreover, Mintert said, just looking at the percentage of favorable responses regarding the impact of NAFTA might not tell the whole story. “An unusually large percentage of survey participants – 24 percent in the case of the U.S. economy and 20 percent in the case of farmers and ranchers – opted not to answer these two questions,” he said. “Although we can’t say for sure why producers opted not to respond to these two questions, it might also reflect a relatively high degree of uncertainty regarding NAFTA’s impact.”
The full September report includes more information about producers’ sentiment toward NAFTA, their expectations for the stock market in 12 months, and what they think might happen with the U.S. economy in the next year. Read the full report at https://purdue.edu/agbarometer.

The Ag Economy Barometer, Index of Current Conditions and Index of Future Expectations are available on the Bloomberg Terminal under the following ticker symbols: AGECBARO, AGECCURC and AGECFTEX.