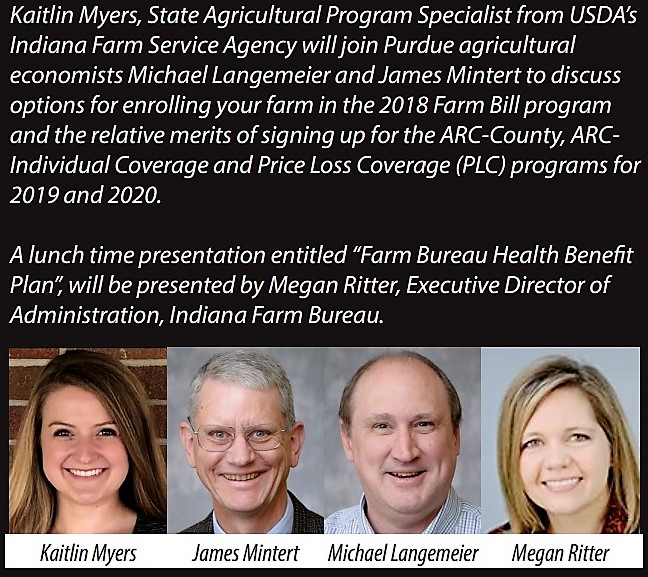 With roughly eighty percent of Indiana farmers yet to make their ARC and PLC decisions official with Indiana’s Farm Service Agency, it has become clear there is more uncertainty about the program this time around. Purdue’s Jim Mintert from the Center for Commercial Agriculture explains under the 2014 Farm Bill the right decision was clear.

“But this time it’s a little different because I think a lot of farmers will want to choose potentially a different program for corn vs. soybeans,” he said. “Secondly people will have an opportunity to update yields, but to do so they’re going to have to gather their records and I think what they’re going to find is on some farms the updating process will result in a higher program yield which they’ll want to capture by going ahead and doing it. On other farms it might not make a difference.”

Mintert says there is some work to do to get to the right decision, but the benefits can make it well worth the effort. He added, there is a new complication to the formula this year, because the ARC IC choice might be relevant when it wasn’t previously.

“Because of the prevented planting situation that we had in 2019 in a good chunk of Indiana and the eastern Corn Belt, there are going to be some people who want to give very serious consideration to the ARC IC program, the individual coverage program, because that potentially could provide them with a significant payment for the 2019 crop. But they won’t know until they do the computations,” Mintert told HAT. “Overall there are more choices that are relevant this time than there were in 2014.”

That’s the reason for more outreach from Purdue in the form of two upcoming workshops. Mintert will be joined by Purdue’s Michael Langemeier and Kaitlin Myers from the Indiana Farm Service Agency at workshops in Vincennes on February 5th and Huntington on February 12th.

Registration is free but required at https://purdue.ag/farmbillworkshop20.

The sign-up deadline of March 15 remains intact, and FSA offices would like to see farmers sooner rather than later.

“There aren’t many working days left to see the majority of our producers through our office,” FSA’s Myers said. “So, it’s really important to make your appointment early, get that paperwork done, and if a producer makes an election now and changes their mind later, they can always change their election up until that deadline.”