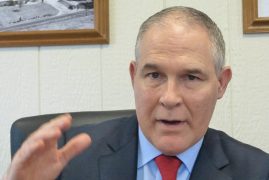 Scott Pruitt will no longer lead the environmental protection agency, president trump announced thursday afternoon via twitter. “I have accepted the resignation of scott pruitt,” Trump tweeted. “within the agency Scott has done an outstanding job, and i will always be thankful to him for this,” Trump also wrote. the President also said that on monday Andrew Wheeler will “Assume duties as the acting administrator of the epa.” “I have no doubt that Andy will continue on with our great and lasting epa agenda. we have made tremendous progress and the future of the epa is very bright!” Trump said.

North Dakota farmer Kevin Skunes, president of the National Corn Growers Association (NCGA), said in a statement, “It’s no secret corn farmers have been frustrated with Scott Pruitt’s ongoing actions over the past year that have seriously undermined the Renewable Fuel Standard (RFS). Even with this leadership change at the EPA, our priorities do not change. We will continue to push the EPA to stop granting unjustified RFS waivers. We expect the EPA to account for the more than 1.6 billion gallons the agency waived from 2016 and 2017 RFS obligations, and we will continue ask EPA to follow through on the president’s commitment to remove outdated regulations to allow higher blends of ethanol like E15 to be sold year-round. We are hopeful Acting Administrator Andrew Wheeler will work with America’s corn farmers to give consumers more options at the pump to save them money and reduce emissions and provide farmers with certainty in the marketplace that comes with RFS integrity.”

Renewable Fuels Association President and CEO Bob Dinneen reacted by saying, “For the past year, Scott Pruitt had been waging war against the Renewable Fuel Standard (RFS), the biofuels industry, and the millions of farmers and rural Americans who helped Donald Trump get elected. It appears these missteps finally caught up with Mr. Pruitt, who apparently thought that RFS stood for ‘Refinery First Strategy.’ Mr. Pruitt’s failure to follow President Trump’s directive to remove the red tape that restricts E15 from being sold in the summertime likely played a part in his demise, and the straw that broke the camel’s back may have been Mr. Pruitt’s recent proposal for 2019 RFS requirements that failed miserably to repair damages done to our nation’s farmers and biofuel producers.”