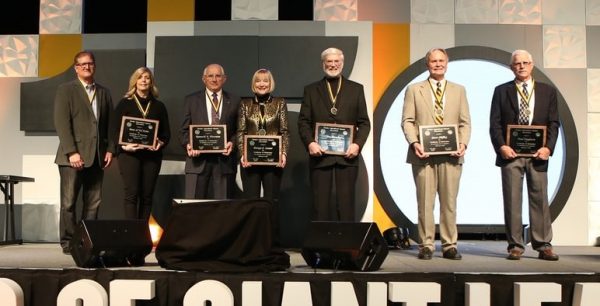 Seven noted graduates and contributors associated with the Purdue University College of Agriculture have received the Agricultural Alumni Association’s highest honor – the Certificate of Distinction.

The Certificate of Distinction is annually presented to professionals who have significantly contributed to agriculture, forestry or natural resources through their career accomplishments, organizational involvement, community service and other activities.

These recipients were honored at the 2019 Purdue Ag Alumni Fish Fry, held Saturday (Feb. 2) at the Elements Financial Blue Ribbon Pavilion at the Indiana State Fairgrounds in Indianapolis.

The wine industry is an increasingly important piece of Indiana’s agritourism industry. Dana and Ted Huber are two reasons why.

“Their personal impact on the growth of the wine industry in Indiana cannot be overstated,” says Christian E. Butzke, a professor of enology in Purdue’s Department of Food Science and enologist for the Purdue Wine Grape Team.

“The Hubers are one of the most dynamic and entrepreneurially spirited wife-and-husband teams that I have encountered in my 25 years working for the U.S. wine industry. … (They keep) their Indiana operation on the cutting edge of agricultural technology.”

“They were at the forefront of agritourism and led the way in nontraditional agriculture and its impact on Indiana,” says Jeanette K. Merritt, who spent 11 years with the Purdue Wine Grape Team.

Four consecutive Purdue Agriculture deans have relied on Kenneth Huseman’s counsel and expertise through his work on Purdue’s Council for Agricultural Research, Extension and Teaching. PCARET is a lay advisory and legislative advocacy group for the dean; Huseman has been a member since 1980.

“(Ken) understands the broader political context in which funding requests must be framed,” says Vic Lechtenberg, who served as the dean of Purdue Agriculture from 1994 to 2004.

“I learned much from Ken about how to best share our story with our federal elected officials,” says Jay Akridge, Purdue provost and former Glenn W. Sample Dean of the College of Agriculture.

“His vast experience and warm style make it easy for people to listen to and work with him,” says Karen Plaut, the Glenn W. Sample Dean of the College of Agriculture.

Huseman holds bachelor’s and master’s degrees from Purdue. He worked for Swift & Co. from 1961 to 1970 and, since 1970, has operated Huseman Farm in Cedar Lake.

“It wasn’t just enough to do his job,” says Donya Lester, former director of the Purdue Ag Alumni Association. “He taught all the rest of us how to do ours.”

After 28 years building and nurturing relationships with 33,000-plus alumni, Donya Lester retired in 2018. A key to her successful tenure? Not standing still.

“To me, one of the hallmarks of Donya’s leadership was her ability to continually reinvent how we approach alumni relations,” says Karen Plaut, the Glenn W. Sample Dean of the College of Agriculture.

Lester’s list of accomplishments is long, but they include instituting the Ag Tailgate event in 2000 and redesigning the Ag Alumni’s Fish Fry event in 2001 to accommodate a larger venue, prestigious keynote speakers and cost-saving efforts.

She also reconfigured commencement receptions for College of Agriculture graduates, which Plaut says parents and graduates alike praise as “a fitting capstone to the Purdue Agriculture experience.” By restructuring the Ag Alumni Board of Directors, Lester also ensured representatives from every department in the College, as well as undergraduates and graduate students.

“Her intentional focus on bringing more recent alumni to the board is paying real dividends,” Plaut says.

Nominations for the Certificate of Distinction occasionally turn up the question: “Doesn’t he/she already have one?” Sometimes – as was the case for Jim Moseley this year – nominators and those writing in support are astonished.

After earning a bachelor’s degree from Purdue in 1973, Moseley and his wife, Kathy, started farming near Clarks Hill. By 1989, Moseley was serving as the agriculture advisor to the administrator of the U.S. Environmental Protection Agency.

He went on to serve at Purdue University as director of agricultural services and regulations, at the National Pork Producers Council as chairman and lead negotiator of the industry team, and the United States Department of Agriculture. From 2001 to 2005, Moseley served as a deputy secretary at the USDA, leading the response for post-9/11 security needs of U.S. food and agricultural systems and heading teams that addressed international agriculture issues.

“Jim is a bit of an unsung hero in that the bulk of his impact and success is not immediately obvious,” says Beth Archer, executive director of AgrIInstitute. “Those who have worked with Jim are fully aware that he truly makes a difference in large and small ways.”

“How do you measure the impact of a forestry research career?” says Lynne M. Westphal, project leader and research social scientist with the U.S. Forest Service. “Publications and citations? Students and early career professionals supported? Foresters helped? Community service? Steve has done it all.”

After a 40-year career with the U.S. Forest Service’s Northern Research Station, Steve Shifley recently retired. Since 1988, he has been based at the University of Missouri in Columbia.

Shifley earned bachelor’s and master’s degrees from Purdue, where he is also an adjunct faculty member. He has written more than 160 publications, delivered more than 75 invited presentations and received more than $3 million in competitive research funding. Shifley’s research had a fundamental effect on how forests are measured, quantified and modeled. He helped develop LANDIS, a landscape modeling system that can work at various scales and incorporate a full range of ecosystem components and functions.

As his former colleague William Brad Smith says: “The future of our nation’s, and indeed, the world’s forests, depends in part on the tireless efforts of researchers like Steve Shifley.”

Thousands of Indiana residents will never be directly aware of the accomplishments Paul Singleton has achieved by being on the board of directors of the Evansville-based Community Foundation Alliance.

“During Paul’s tenure, the nine counties of the alliance — Daviess, Gibson, Knox, Perry, Pike, Posey, Spencer, Vanderburgh and Warrick — have grown assets to $100 million,” says Jill Carpenter, the alliance’s executive director. “This is a direct result of board members like Paul who are willing to engage new practices for growing assets.”

Singleton holds a bachelor’s degree from Purdue and, since 1975, has owned and operated a 300-acre farm in Knox County. During his tenure as a USDA Farm Service Agency director, Singleton made and serviced more than 500 loans to beginning farmers in 11 counties over a 35-year period. He also trained 18 loan officers over a span of 35 years of service and was named FSA Manager of the year in 1998.

“Without his help, guidance and encouragement, I would not have been able to buy my first farm,” says Don Villwock, a retired Indiana Farm Bureau president.