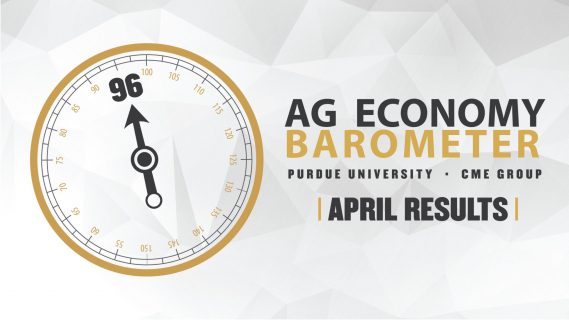 Coronavirus concerns, commodity price declines and supply-chain disruptions sink producer sentiment to a three-year low, according to the April Purdue University/CME Group Ag Economy Barometer. The barometer recorded a reading of 96, marking the first time the barometer has fallen below 100 since October 2016 and registering 72 points below its record high just two months prior. The Ag Economy Barometer is based on responses from 400 U.S. agricultural producers and this month’s survey was conducted from April 19-24, 2020.

Producers’ expectations for current and future agricultural economic conditions also declined sharply. The Index of Current Conditions suffered its largest one-month drop, down 39 points in April to a reading of 72, and the Index of Future Expectations fell 18 points to a reading of 108. April’s decline pushed the Current Conditions Index 53 percent below its all-time high set back in February, while the Future Expectations Index fell 39 percent over the same two-month time period.

“Over the past two months, producers have felt the first shock waves being created by the coronavirus,” said James Mintert, the barometer’s principal investigator and director of Purdue University’s Center for Commercial Agriculture. “Disruptions in the supply chain are causing many to look at ways they can mitigate risk in this uncertain environment and sharp declines in commodity prices have added significant financial pressure on many U.S. farming operations.”

In the April survey, two-thirds of respondents indicated they were “very worried” (39 percent) or “fairly worried” (28 percent) about the impact of coronavirus on their farm’s profitability and over half (54 percent) said they anticipate applying for one of the federal government’s COVID-19 related financial assistance programs. When asked their number one concern regarding their farm and COVID-19, 42 percent of respondents said they were worried about their farm’s access to markets, 37 percent said financial, while just 13 percent said health and safety. However, 35 percent of this month’s respondents said they have already implemented changes in their farm’s operations in response to COVID-19 concerns.

Underpinning the rise in pessimism among farmers was a swift decline in principal commodity prices over the last couple of months. Commodity futures prices declined sharply from early March through late April. Over the course of less than two months, July corn futures declined 15 percent and July soybean futures prices fell by 8 percent while June live cattle and June lean hog futures prices declined 21 percent and 33 percent, respectively. The sharp drop in commodity prices added to an already strained financial situation for many farmers. When asked to compare their farms’ expected financial performance in 2020 to 2019, 55 percent of respondents in the April survey said they expect a worse financial performance in 2020 than in 2019.

That pessimism also trickled down to producers’ near-term farmland price expectations.  When asked to look 12 months ahead, 35 percent of respondents said they expect farmland values to decline, up from only 13 percent expecting a decline on both the January and February of 2020 surveys. However, producers’ longer-term farmland price expectations were more optimistic.  When asked to look ahead five years, 44 percent of producers expect higher farmland values, up from 41 percent who said they expect higher values in the March survey.

“The divergence between producers 12-month and 5-year ahead expectations for farmland values suggests they view the current disruption in agriculture and food markets to be temporary and are looking for markets to rebound down the road,” said Mintert.

Read the full Ag Economy Barometer report at https://purdue.ag/agbarometer. The site also offers additional resources – such as past reports, charts and survey methodology – and a form to sign up for monthly barometer email updates and webinars. Each month, the Purdue Center for Commercial Agricultural provides a short video analysis of the barometer results, available at https://purdue.ag/barometervideo.