The state of the farm economy is top of mind at Commodity Classic. As a result, the Purdue University economic outlook put on by the Purdue Center for Commercial Agriculture drew a standing room only crowd. 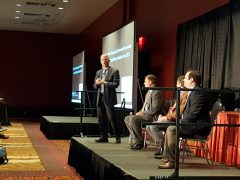 Jim Mintert, with the Center for Commercial Agriculture, gave a detailed and sobering analysis of the current state of the U.S. farm economy. Mintert said the key to survival is management, “We see 2017 as another tough year, but farm operating costs are coming down. We expect to see operating costs come down to equal the price received by growers over the next 2 to 3 years. We do not expect commodity prices to increase to the point of covering the cost of production for several years. Thus, the key is how can producers hang on for 2017 and 2018.” He said fertilizer costs and cash rents will continue to decline, but the costs of seed and crop protection chemicals will continue to rise. 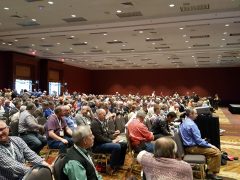 Just after the Purdue program one of the largest farm trade shows opened at Commodity Classic, sporting the latest in production technology and equipment. Mintert cautioned growers about spending on capital purchases, “Producers with tight working capital should only make capital purchases if they really need the equipment.” He added that growers should not make a purchase just to save on taxes, a practice that has been common over the past few years. 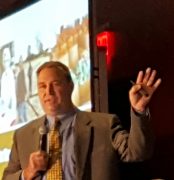 Dr. Jason Henderson, Assistant Dean of Agriculture at Purdue, told the crowd that interest rates will be going up and said the Federal Reserve has the goal of having a prime rate of 3% in the next few years.   He urged growers to not go deeper into debt the next few years.

The program ended on an optimistic note with over a third of the audience indicating they feel their farms will be better off financially a year from now.   The new barometer of the level of optimism of U.S. farmers will be released by Purdue and the CME group on Tuesday.