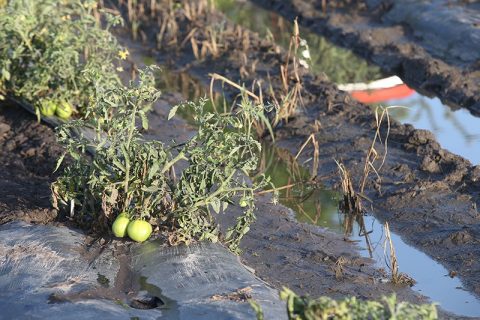 Recent heavy rains across much of the state have resulted in widespread ponding and flooding in fields. This creates challenges for farmers growing produce for fresh consumption because of the potential for the introduction of contaminants into growing areas. With proper management, however, many of the risks introduced by flooding can be mitigated.

“Growers who have water-covered fields should first determine if it is the result of pooling or flooding,” said Scott Monroe, Purdue Extension food safety educator. “Pooled water, generally more common than flooding, accumulates in lower areas of the field or between rows, especially if raised beds are used. Flooding originates from an uncontrollable source such as a river or creek.”

Pooled water can cause damage to crops but generally carries less risk for microbial contamination than flood water, Monroe said. When dealing with pooled water, growers should consider whether or not the water is contacting the edible portion of the crop, how long the water was pooled, previous soil amendments, and whether or not the pooled water has resulted in increased wildlife activity in or near the affected area.

“The U.S. Food and Drug Administration considers food contacted by flood water to be adulterated and not fit for human consumption,” Deering said. “Due to microbial and other concerns, produce cannot be harvested and sold into the public food supply once it contacts flood water.”

In cases where flooding occurs in or near the crop but does not contact the edible portion of the crop, FDA guidance states that growers should, “Evaluate on a case-by-case basis for the likelihood of contamination.”

Produce growers who experience flooding in their fields should first document the extent of the flooding with photos, flags, or other markers. This will ensure that the flooded area remains defined after flood waters have receded. Growers should also remember that flood water may contain chemical contaminants, in addition to human pathogens.

“If at all possible, flooded fields should be planted with agronomic crops this season,” said Monroe. “However, on smaller and non-diversified farms that may not be a viable option.”

If it becomes necessary to plant produce in flooded fields, growers should leave fields undisturbed as long as possible. Research performed at the Southwest Purdue Agricultural Center in 2015 indicated that leaving fields undisturbed might be the best way to encourage die-off of flood-deposited bacteria on soil surfaces.

“At a minimum, fields should be allowed to dry thoroughly and should receive several days of intense sunlight before any tillage operations take place,” Deering said. “This may mean changing planting plans so that previously flooded fields are reserved for late crops.” Growers should also consider using flooded fields for produce that is seldom consumed raw, such as pumpkins or sweet corn. These commodities are generally cooked prior to consumption, which introduces a kill step and significantly reduces microbe populations.

Growers should also pay close attention to water sources, as they can become contaminated by flood water. Wells used to supply water for production or post-harvest should be tested for generic E. coli prior to use. While microbial risks are often the focus when dealing with flooded fields, growers should remember that flood water may contain other contaminants.  Always seek technical advice before investing in tests for non-microbial contaminants.

In cases where only part of a field is flooded, growers should take steps to minimize cross-contamination into the rest of the field.