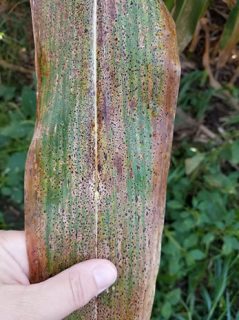 Telenko, whose research focuses on promoting sustainable and economically sound disease management practices in Indiana field crops, monitors for tar spot with her team each year beginning early in the season. As of now, only 11 Indiana counties remain on the team’s map without reports of tar spot. She suggests growers use their map and the Tarspotter App to help guide future disease management decisions. Suggested management includes selecting moderately resistant hybrids if available and timely application of fungicide.

“Tar spot can survive in residue from previous seasons, so you need to understand field history to make informed management decisions. If you have fields with significant tar spot, I would talk to your seed dealers to see if they have any hybrids with moderate resistance,” Telenko said.

Tar spot can be identified visually, but a laboratory diagnosis is required to distinguish it from other pathogens. Contact the Purdue Plant and Pest Diagnostic Laboratory to submit a sample.

Tar spot of corn is caused by the fungus Phyllachora maydis. It was first confirmed in the U.S. in 2015 on dent corn in seven counties in northwest Indiana and 10 counties in north-central Illinois. Telenko’s field research data and maps can be found here.