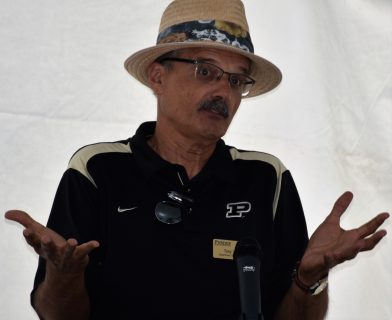 The Purdue University Board of Trustees has appointed Tony Vyn, professor of agronomy, to the Henry A. Wallace Chair in Crop Sciences. The endowed chair is funded by Corteva Agriscience™, Agricultural Division of DowDuPont. The Henry A. Wallace Chair supports a faculty member who applies modern technology to crop science and who will oversee research conducted by students, faculty, staff and industry professionals. This position supports the college’s Institute for Plant Sciences, which is a global leader in making dramatic advances in plant-based agriculture crucial to feed a growing population.

Vyn, who was born and raised on a mixed farm in Ontario Canada and studied at the University of Guelph, was drawn to his work in cropping systems research, teaching, and extension outreach from as early as high school through college and graduate school to his current position in Purdue’s College of Agriculture. Vyn joined the department of agronomy in 1998. Throughout his career, he has worked in a number of research areas including: improving nitrogen and water use efficiencies in cropping systems; creating maize plant phenotyping approaches to evaluate genotypic differences in internal nitrogen efficiency; improving soil and air quality via adoption of conservation tillage systems; and evaluating the soil and plant nutrient consequences in Sub-Saharan Africa of producing maize hybrids with higher nitrogen use efficiency.

Vyn expresses a sense of connection with Henry Wallace, in whose honor the chair was endowed: “I respect Henry Wallace’s almost prophetic boldness in advancing agricultural science, his risk-taking in co-founding the Hi-Bred Corn Company in 1926, his role as an ‘agent of change’ as Secretary of Agriculture and Vice President, his high regard for soil conservation, and his long record of persuasive writing in several books and numerous editorials on agricultural concerns. Henry Wallace’s commitment to the value of science only intensified when commodity prices shrank, and I admire his strategic thinking.”

Karen Plaut, the Glenn W. Sample Dean of Agriculture, explains how his many contributions led to Vyn’s selection for this prestigious chair, the first of its kind to support the college’s Institute for Plant Sciences, which received its initial funding as part of the Purdue Moves initiative. This chair brings together multidisciplinary research and education to move discoveries from the bench to application and commercialization: “Tony has been Purdue’s Cropping Systems Extension Agronomist for many years. I am delighted to see his contributions honored by his selection. Everything, from his research to his outreach efforts to his leadership, ensures that Tony and his team will continue to make a tremendous difference in implementing change and securing a sustainable future for crop sciences.”