Purdue’s Hurt: Pork Outlook Better for ’19 but Still Operating at a Loss 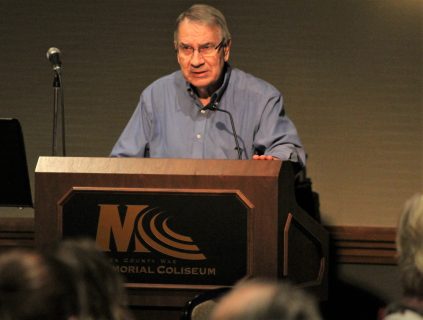 Purdue Ag Economist Dr. Chris Hurt spoke at the Fort Wayne Farm Show last week to discuss his outlook for 2019. He gave Hoosier Ag Today his expectations for corn, beans, and wheat at the Indiana Farm Equipment and Technology Expo last month, so this time we focus on the livestock industry, hogs in particular.

Hurt says 2018 was a tough year for pork producers and he’s hopeful that 2019 will be a bit better. He has his fingers crossed that trade issues with Mexico and China will be resolved soon.

“That’s going to allow us to export about 8 percent more pork at some higher prices. We’re looking at around $49 average price for 2019. That still will be some loss, but last year, ’18, we had losses about $12 a head. We expect that to be more like $5 to $6 a head, and that would be for average cost producers. Low cost producers still would be probably covering cost or making a little money.”

I asked Hurt if his numbers could come in low if we can work out a trade deal with China and we find out how bad African Swine Fever has hit the country. He says it’s possible as China currently produces 97% of their own pork.

“And what that means is that since only 3 percent of their total consumption is imported, a one percent loss of their production means they will increase imports by a third. That’s a huge number.”

Hurt says even if we don’t come to an agreement with China, there will still be opportunities available.

“They’re going to import more of that pork from Canada and Europe, but that’s going to give the United States an opportunity to sell to some of those markets. So, even if we don’t get the trade problem settled with China, we think there would be a big benefit to more US pork exports in an African swine fever spreading in China.”