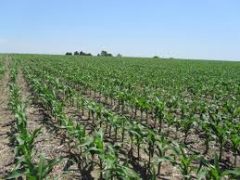 Spotty rain showers provided much needed moisture to many parts of the State, according to Greg Matli, Indiana State Statistician for the USDA’s National Agricultural Statistics Service. The rain showers missed some areas prompting farmers with irrigation systems to continue irrigating. In other areas, rain was excessive, causing localized flooding. The statewide average temperature was 70.6 degrees, 2.1 degrees below normal. Statewide precipitation was 1.70 inches, above average by 0.82 inches. There were 4.1 days available for fieldwork for the week ending June 25, down 0.2 days from the previous week.

Corn and soybean were growing rapidly following the hot and humid temperatures earlier in the week, but crop development remained behind average. Corn producers in central counties reported great variability in emergence, height, maturity, and condition, even within the same fields. Wheat is close to the end of maturity and harvest has started in many southern parts of the state. Pastures and hay are starting to come back to greenness after a very hot and dry spell.

Livestock was reported to be in good condition. Other activities included hauling grain, scouting for pests, side dressing corn, mowing roadsides, applying herbicides and insecticides, and certifying acres at FSA offices.