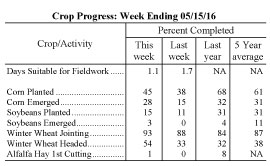 Planting progress continued to be behind schedule due to increased rainfall and below average temperatures, according to Greg Matli, Indiana State Statistician for the USDA’s National Agricultural Statistics Service. Overcast skies and periods of heavy rains kept the soils too damp for planting in many parts of the State. The southern region received the heaviest rainfall, with some counties accumulating over 3 inches. Statewide average temperatures were below normal at 58.0 degrees. Patchy frost was reported throughout the State. Statewide precipitation was 1.51 inches, above normal by 0.95 inches. There were 1.1 days available for fieldwork for the week ending May 15, down 0.6 days from the previous week. 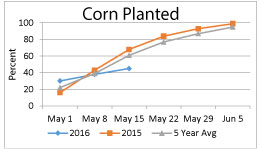 By region, soybeans planted was 18% complete in the North, 16% in Central, and 7% in the South. Soybeans remain far behind last year due to delays with corn planting. Few soybeans have begun to emerge.
Localized flooding occurred throughout the State which has some concerned about replanting for corn and soybeans. Hay growth also slowed down this week albeit the condition is still good. Many alfalfa fields are ready to be cut, but farmers could not get equipment into the fields. Much of the tillage work is at a standstill until fields dry out. Livestock continues to be in good condition. Melon planting continued.

USDA’s weekly crop progress released late on Monday showed 75% of the nation’s corn was planted as of Sunday and 36% of the soybeans. Both of those numbers are ahead of the five-year averages. The report said Iowa was 88% done on corn, Illinois 83%, Indiana 45% and Ohio 34%.