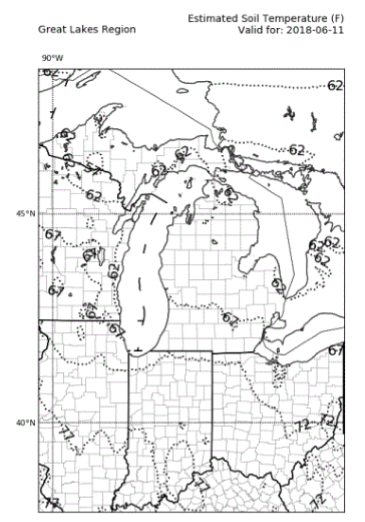 Spotty rain showers helped improve crop conditions, according to Greg Matli, Indiana State Statistician for the USDA’s National Agricultural Statistics Service. Precipitation was highly variable, with some locations receiving downpours leading to ponding and light showers elsewhere. As of Tuesday, The U.S. Drought Monitor identified a stretch of abnormally dry ground stretching from Vincennes in the Southwest to Marion in Central Indiana. This swath passes south of Lebanon and North of Bloomington. Portions of Lake and Jasper County were also dry. Most crops benefited from the rain and cooler temperatures. However, some fields experienced high winds and hail damage. The average temperature for the week 70.8 degrees, 2.0 degrees above normal for the state. The amounts of rainfall varied from 0.00 inches to 4.50 inches over the week. The statewide average for precipitation was 1.05 inches. There were 5.2 days available for fieldwork for the week ending June 10.

Dry weather at the beginning of the week allowed for weed treatment and baling hay. The dry weather and signs of stress from crops prompted some farmers to irrigate midweek especially on specialty crops like tomatoes, crops on sandier soil, and newly planted crops. Corn and soybean stands look good but some fields experienced hail damage and weed infestation. Corn and soybeans planted acres are nearly complete but strong hail in isolated places has created a need for replanting. Livestock are reported to be in good condition. Other activities for the week included fertilizer application, side dressing corn, and applying herbicides to corn and soybeans. 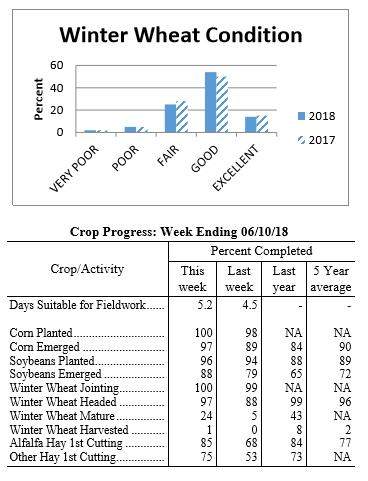 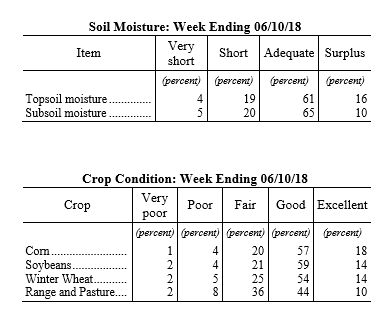