The statewide average temperature was 67.9 degrees, 10.7 degrees above normal. Statewide precipitation was 1.37 inches, above average by 0.57 inches. There were 4.7 days available for fieldwork for the week ending October 8, down 2.1 days from the previous week. 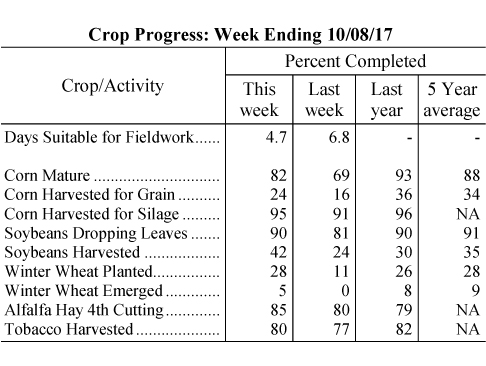 Rain showers caused a shift in the focus of harvest from soybeans to corn. Corn harvest is still behind the five year average. Many farmers had made significant progress with soybean harvest prior to the rain, harvesting most of the mature soybeans. Several areas in fields of replanted soybeans have yet to reach maturity. Current prices are encouraging farmers to let the grain dry in the field. Added moisture from the rain should help with emergence in planted wheat. Additional rain is needed to improve pasture conditions. Livestock are reported in good condition in spite of pastures. Tomato harvest is near completion. Pumpkin harvest is still underway. Other activities for the week included fall tillage, planting cover crops, preparing and repairing equipment, and hauling grain.